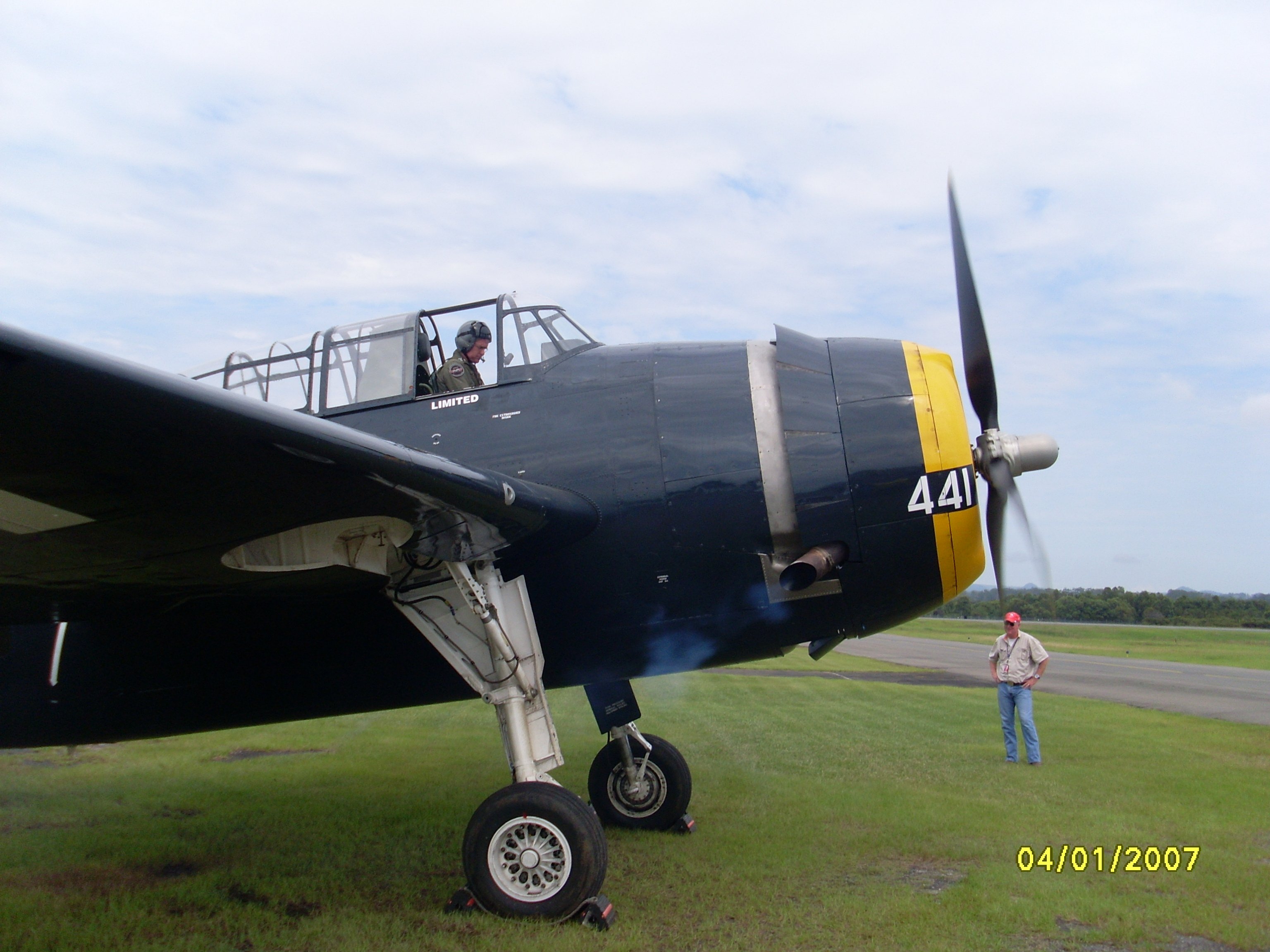 The TBM Avenger was the largest single engine aircraft produced during WWII, built by the Grumman aircraft company and designed as a torpedo bomber it served with distinction particularly in the Pacific theatre.

I first laid eyes on the Avenger at an air show at NAS Nowra in New South Wales and I was amazed at it’s size. The other impression was the way in which the wings folded, it was a fascinating piece of engineering. The mechanism was based on other Grumman fighters but on, naturally, a much larger scale. The engine is a 14 cylinder twin row radial known as a Double Cyclone R-2600-8 (or20) which I think produces about 1,800 HP.

There were three of these aircraft operating in Australia at the time I was involved with warbirds. The late Steve Searle had acquired two of them to add to his collection and his associate, some up and coming aerobatic pilot, by the name of Paul Bennett was keen to have one come to the Hunter Valley.

There was a bit of difficulty with this in that it was thought that Paul did not have the necessary experience to gain an endorsement for the aircraft and his training was refused. Paul contacted me and asked if I would get endorsed on the aircraft and bring it to the Hunter Valley where he might be endorsed at a later date. I naturally agreed to the proposal and we set off to Beaudesert to pick up the best of the two aircraft VH-MML or serial number 441.

Matt Handley of Aerotec in Toowoomba was to give me my endorsement and so he flew the aircraft from the grass strip at Beaudesert to Coolangatta with myself sitting in the observers seat behind him. The first thing I noticed when he was doing the engine runs before we flew it was that it punched out huge bullets of oil from the exhaust pipe and blew them back over the airframe up until it started properly.

So training consisted of talking about all aspects of its operation, going through the checklist, doing a couple of starts and then some taxiing around. Then it was time to go flying, I crawled up into the cockpit only to see my instructor still standing on the ground. I turned to him and said “hey aren’t you coming with me?” his reply was “no what can I do there’s no stick in the back seat.”. I then asked “what if I have a question or have a bit of trouble?”. His reply was “oh you’ll be able to sort it out you’ll be OK.”.
So off I went, solo, having never flown such a bloody big tail dragger aircraft in my life.

I flew down to Ballina to do a couple of simulated circuits at a little airfield just to the North of Ballina then back to Coolangatta. As I entered downwind for the circuit at Coolangatta the engine backfired and started to run roughly. I declared an emergency and seriously inconvenienced a passenger aircraft trying to land there as he had to abort his approach and have another go after I landed. The landing, my first, was the best that I was ever going to do in the aircraft. The undercarriage is very long making touch down assessment very difficult.

The technicians gave the aircraft a look over and an engine run declaring it as a momentary hiccup that would, in all probability, never happen again.

So preparation was made to set off to the Hunter Valley with a stop over at RAAF Base Williamtown to let personnel have a look over this big magnificent machine. I took to calling the aircraft “Big Mumma” after someone remarked that “that is one big mother….of an aircraft!”.

We set off for Williamtown with Paul Bennett in the observers seat along the coastal route at about 3,000 feet thoroughly enjoying the great weather and the spectacular scenery of the Australian coastline. After about an hours flying, abeam Port Macquarie the engine let out a large “Bang” associated with a bit of rough running. A quick referral with Paul who calmly said that it was just a sticky valve so press on. As soon as he said that the engine let out a series of very loud “Bangs” with quite rough running. An immediate right turn for the forced landing pattern at Port Macquarie was made and an emergency declared. My second best landing ensued and despite some ground engine running the problem would not repeat itself.

As it turned out there were two fuel inlet valves causing the problem, these being replaced/fixed some weeks later. We then completed the trip to the Hunter Valley.

I managed to take the aircraft to Williamtown some time later for everyone to look at as promised. Paul got his endorsement along with Mr Phil Unicomb and they continue to operate the aircraft at air shows around the country. I was fortunate to operate ‘Big Mumma’ for a couple of months before letting the other guys take full control of her.

What was the aircraft like to operate? In two words it was very heavy on the controls but otherwise enjoyable. The most unpleasant aspect of it was having to pull the propeller through 30 times by hand before starting the engine, that was heavy work I assure you.

This was another privilege in my flying career that I am very grateful for having. Thanks to Darren “Motty” Mottram for his photo below.