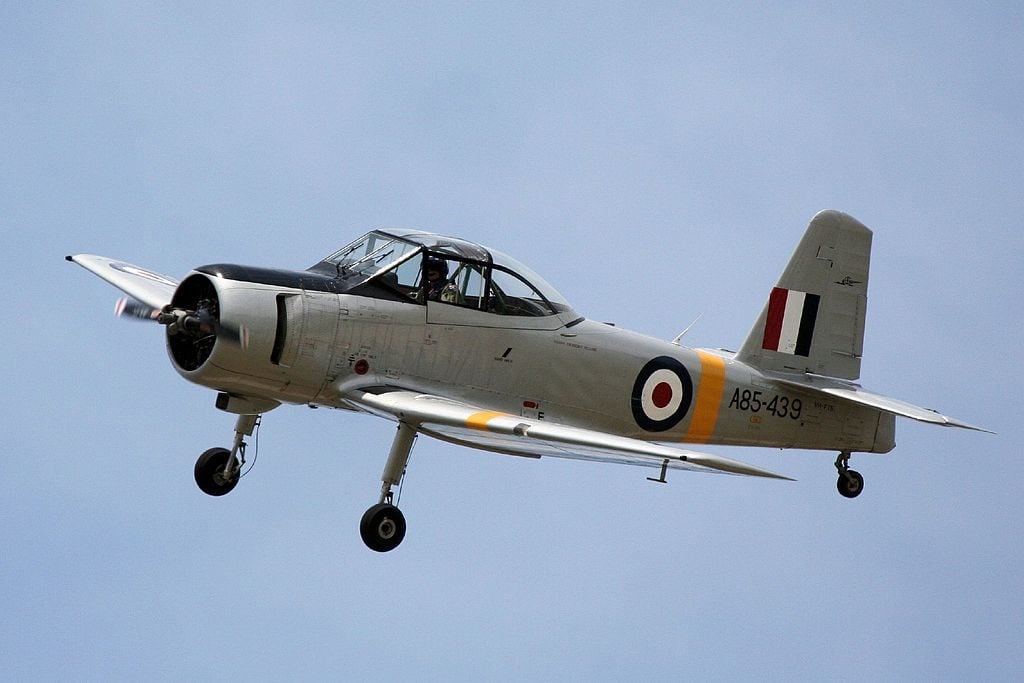 A85-139 CAC Winjeel which is located at at the RAAF Museum, Point Cook, Victoria.

The Winjeel replaced the Tigermoth and Wirraway as the primary basic trainer for the RAAF in the late 1950s. It was loosely based on the British Piston Provost which had a three bladed propeller compared to the two blades on the Winjeel. From a distance the similarities are obvious but in essence they were very different in many ways. The prototype Winjeel was found to be way too stable to be an effective training aircraft because it couldn’t be induced to spin and so the tailfin was moved forward and offset by a small angle to reduce it’s stability. This proved to be very successful as I have always maintained that the Winjeel was the only aircraft that I have flown without an onboard computer with a mind of it’s own. The inexperienced pilot could find them self a mere passenger as the bloody thing took off in an unauthorised or uninitiated direction, particularly on landing.

The aircraft was powered by a 9 cylinder Wasp Junior radial engine producing 445 HP and able to get to around 160 knots or 290 km/hr. It could stay airborne for 3.5 hours. Before I joined my pilot course in 1974 I was an aircraft technician and indoctrinated to believe that aircraft were dangerous animals waiting to kill or maim the unwary young technician. The Winjeel is not a small aircraft and when you are built like a weed your first impression of it is very intimidating, particularly given your previous training. It seemed to look down on me and say “you ain’t man enough sonny”. So my first steps in my pilot training were not good. My first instructor FLTLT Clint Rowland was an ex-fighter pilot on Mirages and more recently he had flown F-4 Phantoms and the F-111. That meant that he was a perfectionist and demanded the same from his students. What a disappointment I must have been for him in the beginning. He tried every instructional technique in the book to get me to progress eventually resorting into abuse and physical contact. This did the trick and I got my back up, put in an enormous effort with the attitude of “I’ll bloody well show you, you bastard!”. I finally went solo after 13.5 hours, the last one on my course, and I didn’t look back after that. Clint was very relieved and I think he actually smiled once. I am deeply indebted to Clint for figuring out what was needed to spur me on. The image of the Winjeel at the top of the post is the actual aircraft that I went first solo in A85-439. Anyway what about the Winjeel?

The aircraft, being a tail wheel aircraft, had limited forward visibility when it was on the ground and taxiing it needed quite a bit of concentration. The tailwheel could be unlocked by pushing the stick fully forward whereupon it was fully castoring and the aircraft could be turned in a very small turn circle. This however, was a trap for young student pilots on landing, after doing aerobatics, as loss of control and subsequent ground loop (just like a car spinning out on a corner) was a constant fear. There is a saying that every pilot who flew a tailwheel aircraft has either done a ground loop or was destined to do one at some point. I did not ground loop the Winjeel at any time although I came very close a couple of times. No, I ground looped a Hawker Seafury, a much more spectacular event, but that’s another story. As all pilots who operate single engine propeller aircraft will tell you that for every change in power or speed there has to be a commensurate change in rudder position and trim. So it was in the Winjeel on take off the aircraft yawed to the left quite strongly requiring about half right rudder input to counter. In the air power changes required right rudder input and speed increases left rudder input the opposite being the case for power and speed reductions. Most aircraft have an instrument called a slip/skid ball which faithfully indicated a student pilot’s ineptitude to appropriately deal with these changes in the aircraft’s condition. Once the art of straight and level flight was mastered, it was on to climbing and descending and then just before you got some semblance of control over this, turning as well was added to further demoralise the student pilot. Then it was on to stalling, this is where you slow the aircraft to the point where the wings are unable to produce enough lift to support it. This is pre-empted by airframe shaking and finally the nose drops away and the stall is complete, all you have to do is regain control again with power and diving the aircraft. Now with the Winjeel if you tried to stop the aircraft rolling at the stall by using the ailerons i.e. picking up the dropping wing the thing would immediately roll on it’s back and, if unchecked, enter a spin. So you had to use the rudder to recover the wing drop (the secondary effect of rudder use is roll, aerodynamics 101). Most of the Winjeels dropped the left wing at the stall but some dropped the right wing and still others could drop either one, very frustrating and embarrassing when you are primed to use right rudder as the stall was entered. Well I learnt my spin recovery actions very early on in my training, didn’t I?

Flying circuits and bumps encompassed just about every facet of flying, apart from aerobatics, that had to be mastered. The Winjeel was difficult to fly accurately and as I mentioned before prone to just wandering off somewhere without any input from the student pilot. This usually occurred while said student was completing the seemingly myriad of checks that were required to ensure all systems were in check and proper preparations were complete before attempting to return to earth gracefully or otherwise. The landing, the terrifying, all important 0.1% of the entire operation that would determine the success or not of the rest of the flight. The RAAF insisted that the aircraft be landed in the three point attitude (all wheels touching at the same time), this brought into play another force in aviation, gyroscopics. That big propeller out the front spinning at around 2,000 RPM was disinclined to change it’s orientation to the earth’s surface, due to gyroscopic effect. If forced to it would react in an unexpected direction, that is at 90 degrees to what seemed natural. This happened on take off as well as landing. Essentially elevator input, down for take off to get the tail wheel up and vice versa on landing, amplified the swing of the nose at the critical point of the exercise, how convenient.

Aerobatics were, for the most part, reasonably less difficult to accomplish some acceptable proficiency once the required rudder inputs were understood and applied. Then there was the slow roll, it was the benchmark exercise that had to be mastered to gain any respect of your instructor. So after applying aerobatic power and achieving the necessary air speed you lifted the nose to five degrees above the horizon (not 4 not 6, 5) this slowed the aircraft requiring left rudder, no wait, right rudder (umm?) anyway you then applied aileron, to the left was easier, (direction of rotation of the prop assisted roll rate) at the same time pushing the stick forward to prevent altitude loss, then reversing whatever rudder input you came up with at the outset, all the time adjusting aileron input to keep the roll rate consistent. As you completed the second half of the roll the stick needed to be gradually pulled back to prevent the nose dropping away, aileron gradually to neutral and lastly rudder gradually central to prevent yawing away from the original direction of travel. Then with a bit of a grin or grimace you would look over at your instructor who was wearing a helmet to stop him from pulling his hair out. He would assess your attempts with graduated verbal marks that ranged from “appalling” to the very encouraging “dreadful”. I believe that I was able to reach the very envied score of three “appallings” followed by four “dreadfuls” before I left basic training at Point Cook Victoria.

Anyhow the Winjeel was an excellent trainer that commanded respect and really gave the student pilot a sound grounding (no pun) in aircraft control. I am proud to say that I learnt to fly on it. There are quite a few flying around the country and you can, in some cases, purchase an adventure flight in one. If you are interested in flying in one, email me and I will put you in touch with someone that will accommodate you. 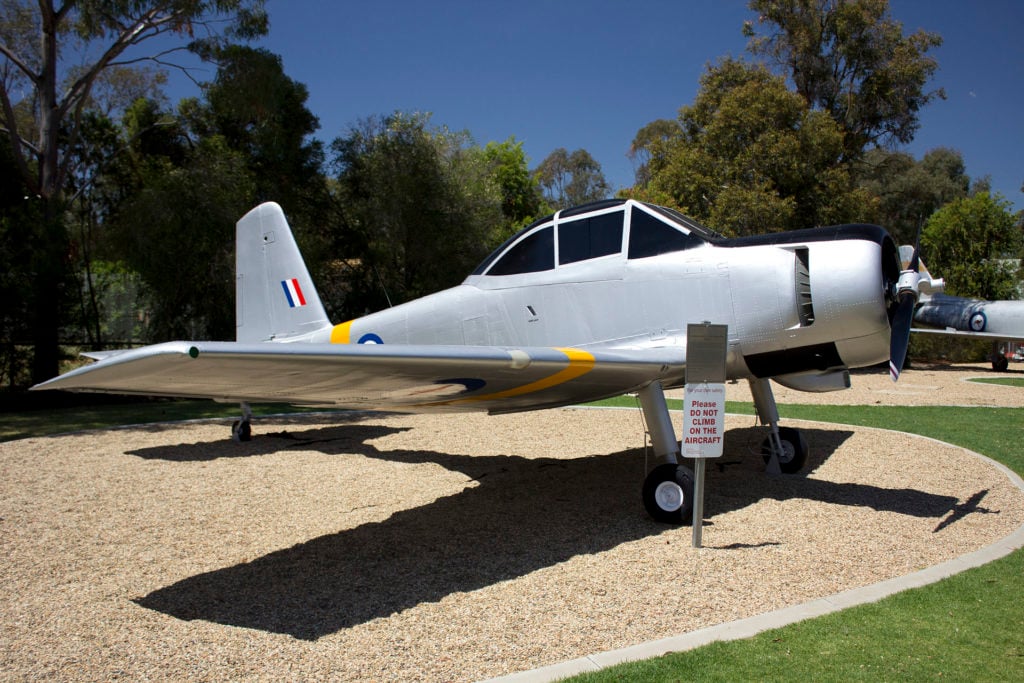