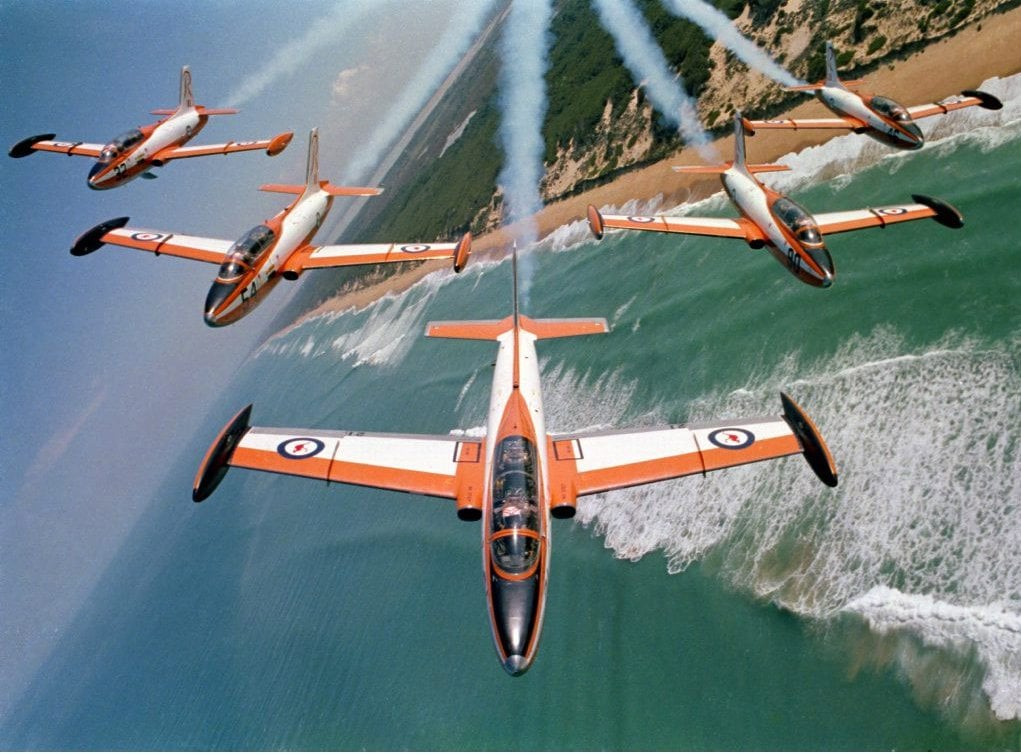 The Roulettes first air show was at Point Cook in Dec 1970. Their last air show using the Macchi was at Lakes Entrance in June 1989.

The Macchi MB-326H was introduced to the RAAF to replace the two seat Vampire as the RAAF’s advanced training aircraft in the late sixties. The RAAF ended up with 97 in all. It was powered by a Rolls Royce Viper engine producing 2,400 pounds of thrust. It was one of the few jet aircraft that was fully aerobatic and permitted to do stall turns, tail slides and hammerhead stalls. Many jet aircraft cannot do these manoeuvres because the back pressure on the turbine blades (in the back of the engine) could be enough to stall the engine causing it to flameout. The last flight by a Macchi in the RAAF was in early 2001 after more than 30 years of service, very commendable. Imagine owning a race car and racing it two to three times per day five days a week, sometimes on weekends, for thirty years. That gives you some idea of the robust design of the aircraft. Over the years of its service it came to be known as the “Spaghetti racer” and the “Macchischmitt” as it was used for dissimilar air combat tactics against the Mirage and Hornet. You might not think that that was a fair fight but many overconfident fighter pilots fell victim to the Macchischmitt not appreciating its ability to turn very tightly. I have my own film of a “guns kill” on an F/A-18 Hornet that I achieved during one of these missions.

I was also an instrument technician in my younger days and I worked on the Macchi, it was a delight to service with ease of access to all areas requiring attention. Just over halfway through its service life it was decided to complete a ‘life of type extension’ by refurbishing the wing mounts and re-skinning the wings. This proved to be a disaster with one aircraft suffering a catastrophic failure of the wing attachment point in mid-air killing the pilot FLTLT Russ Page. It was subsequently found that the refurbishing of the wing mounting points was not conducted correctly. Additionally the wing re-skinning was also unsuccessful requiring small triangular pieces of metal, called sharks teeth, to be attached to the wing leading edge to ensure proper airflow over the wing surface. Towards the end of the service life of the aircraft it was necessary to continually swap wings and tail sections from all over the fleet to try to keep as many aircraft serviceable as possible so that training of pilots could continue. This was helped by the introduction of the Pilatus PC-9 as the advanced training aircraft for initial pilot training, with the Macchi continuing to be used for introductory fighter training at 25 Squadron RAAF Base Pearce and various units at RAAF Base Williamtown but eventually 76 Squadron.

The Macchi was a very pleasant aircraft to fly with virtually no real vices, for example you could stall the wings and apply full power flying away with a climb rate of about 500 feet per minute fully stalled. It would spin if you persisted in holding pro-spin controls and it would recover very quickly with the appropriate recovery technique. It was not very fast, climb speed was 200 knots and cruise was around the 250 knot mark. The ‘never exceed speed’, Vne, reduced over time as the aircraft aged eventually ending at 395 knots. There were times when this may have been exceeded by a reasonable margin such as finding ones self over the top of an F-111 cruising unannounced through our airspace just waiting to be attacked. Diving from 10,000 feet at full power while following my flight lead in the attack I noticed that I had already exceeded the Vne by more than a few knots, I also noted that my flight lead was pulling away from me at a fair lick of speed. My attempt to follow him through the turning pursuit curve for the attack proved way too hard as the controls were so heavy I couldn’t budge them. How my flight lead managed to execute the attack and simulated kill I have no idea. With the F-111 dispatched in a simulated kill the formation climbed back up to 10,000 feet to resume the scheduled mission although they did have to wait for me to catch up to them after I went spearing off into the middle distance in the opposite direction to the fight with, as they say, my “hair on fire”.

I managed to accrue 1200 hours on the Macchi and I have a lot of great memories of the fun I had flying it. My first adventure that I recall happened on my Introductory Fighter Course while climbing out to the training area in a four ship formation, I was alerted to the Fire Warning light illuminating on the warning panel. This is probably one of the most frightening warnings that a pilot might be confronted with as, if the fire is confirmed, the usual result is an ejection. So I declared a Mayday and departed the formation to track back to Williamtown via a forced landing pattern, all the time being shadowed by an instructor in another Macchi. Having practised the forced landing pattern so many times it was a routine exercise and I completed the landing perfectly shutting down the aircraft on the runway and egressing from the machine bravely running away waiting for the explosion. Nothing happened, the aircraft sat there all quiet with no smoke, no blistering paint, no crackling of tortured parts, nothing. The first person to arrive on the scene was the Air Commodore in charge of the base, not the fire fighters, and he wanted an explanation as to why I had chosen to block his runway with my (actually his) Macchi. I explained to him that I had had a Fire Warning and I had followed the checklist and procedures to the letter. He then quizzed me as to which fire light had illuminated to which I replied “there is only one Sir”. He was a Mirage pilot and the Mirage had two fire lights for front and back of the engine. So apparently not believing me he proceeded to look in the cockpit of the aircraft to see if I was telling the truth. This somewhat frustrated the fire fighters who had finally arrived on the scene looking for some tiny piece of evidence of fire so that they could bring to bear their entire arsenal of fire fighting weaponry on the hapless Macchi. But all was in vain as it turned out to be a false alarm caused by moisture and dirt ingestion over the years in the fire detection system.

I did have a brief brush with fame and Macchi history as an instructor at 76 Squadron. The aircraft could be fitted with mini guns, these were a Gattling type of weapon with six rotating barrels firing around 2,000 rounds per minute (from memory). The fitment on the Macchi had one on each wing and they carried 200 rounds in each weapon. We would fire the guns at a 20 meter by 20 meter banner strung from two poles, the scoring of hits on the banner was achieved by a microphone at the base of the banner. The microphone registered supersonic bullets in a semi-elliptical area that covered the banner. Ordinarily a score of 60 or 70 out of 400 rounds was considered well above average. On the day in question the weather conditions were perfect with no wind whatsoever, I managed a score of 383 hits, absolutely unheard of and I was considered to be an absolute marksman at this skill set. So a great mate of mine, one Squadron Leader Bruce Hartwich proceeded to the range and scored 385 hits relegating me to second place and a ‘hasbeen’. This would be a common occurrence with myself and Bruce as he and I competed for best weaponry scores in Mirages at 3 Squadron RAAF Base Butterworth Malaysia and he always beat me by quite small margins. Sadly Bruce is no longer with us but I was privileged to have had him as a friend, mentor and boss, onya mate.

I ended my permanent air force career in 1997 as the Commanding Officer of 76 Squadron flying the Macchi so it has a special place in my wonderfully rich experiences and memories. 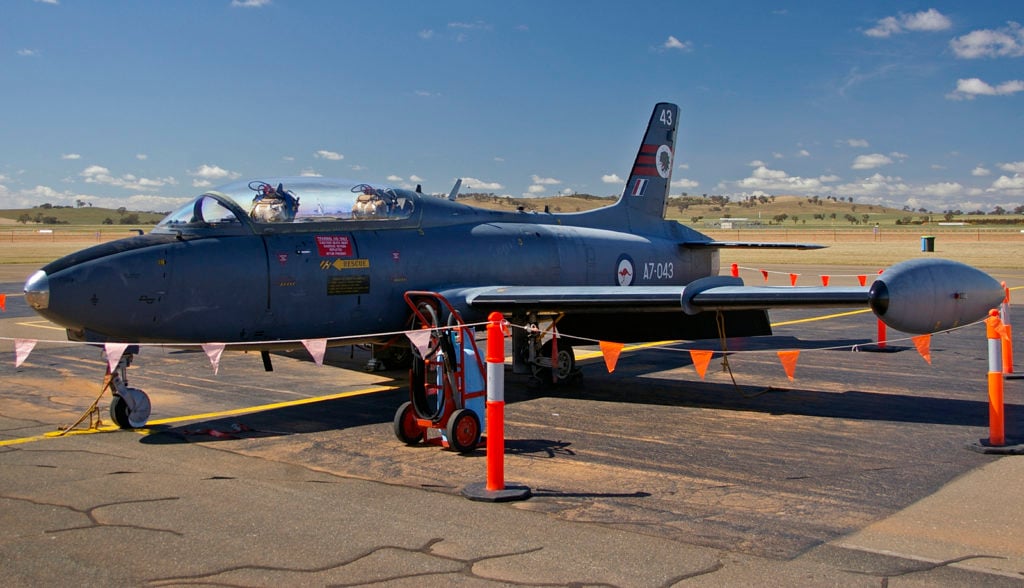 Below is a short video about the Macchi MB-326H