During my time at 36 Squadron flying C-130 Hercules I was tasked to take a Hercules into West Irian or Indonesian West Papua.  This was incredible because the Indonesian government would not let any foreign military personnel any where near any part of West Irian.  The task required us to enter the country at a place called Merauke on the South coast of New Guinea next to the border with Papua New Guinea then proceed to Timika also on the Southern coast and some 900 kilometers North West of Merauke.  Then it was back to Merauke and on to Darwin to complete the task.  We were required to go through Merauke in order to obtain customs and immigration clearance both in and out of the country.  Timika had a gold mine and apparently needed some expert intervention to improve/repair some vital infrastructure that could only be sourced in Australia. The mission was to drop off a couple of civilian contractors and a team of Australian Army engineers and survey specialists along with their equipment.  The restriction placed on us was that we were not to take on any fuel in the country due to concerns about the quality of fuel supplies in Merauke.  There was no fuel available in Timika.

Having done all the study we could on the two places and the airfields we would be using we discovered that there really was scant information on either place.  Merauke was a provincial town about the size of Armidale with an Indonesian Army base.  Timika was a tiny fly spot on the map that was really a small village of local natives for the most part.  The documents on both airfields were also lacking in information.  Timika was a dirt strip barely big enough to take a Hercules but nonetheless adequate.  The information on Merauke had a surprising and alarming entry stating that “aircraft intending to land at Merauke are to do a low level, high speed pass over the runway to scare off the cows and donkeys”.  It was indicated that the runway was bitumen and so ideal for us to land on….we thought.

We took on the maximum fuel load out of Darwin for our mission, since we only had a small cargo load.  Even so fuel was tight and we would have to be careful to allow enough for the return journey.  Weather for Darwin was good as was Merauke, Timika on the other hand had some low cloud and rain in the area.  Typical for a tropical jungle area and there seemed to be some tropical storms around as well.

The flight to Merauke was trouble free and our fuel usage was better than expected.  On arrival at Merauke we were met with a herd of cows and donkeys occupying the landing strip and so we proceeded to conduct the low level high speed pass to scare them off.  I was not confident that all of these animals would vacate the runway but when we turned onto final approach they were all gone which was a relief for me.  On landing we noticed two disturbing things, the runway was covered in ‘mushy’ animal droppings and the runway was lifting up in front of the aircraft causing a bow wave of bitumen.  The animal droppings could present a biological hazard on re entry to Australia that might mean the aircraft would have to be quarantined for a massive clean before being allowed to return home.  The bow wave of bitumen was caused by the fact that whoever laid the bitumen did so over perforated steel platforms  (PSP) or Marsden Matting, left over from WWII and the weight of the aircraft pushed it all up about six inches in front of the nose wheel.  The adventure had started!  Having taxiied to the terminal and getting out to inspect the aircraft we were relieved to find not too much ‘poo’ on the wheels, wheelwells and rear of the aircraft and we would probably be able to hose it off ourselves.  The flight engineer inspected the runway and reported that the whole strip had settled back nicely into position. 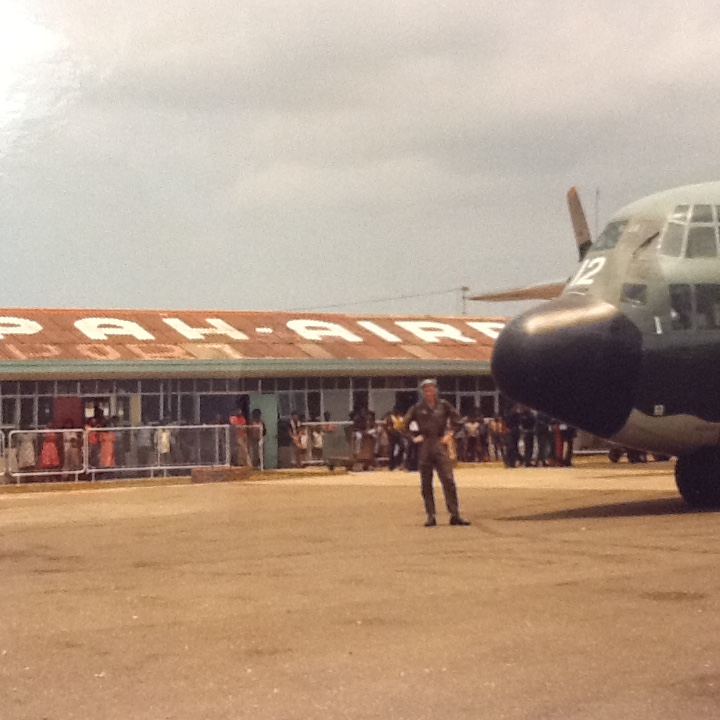 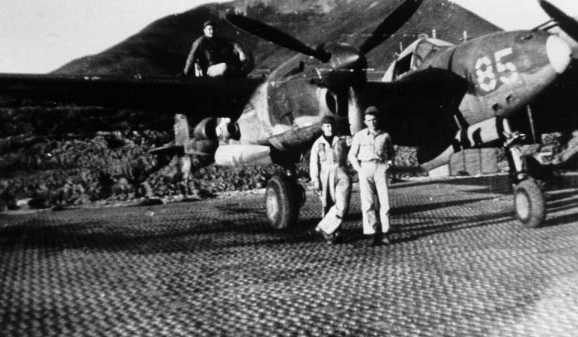 We then gathered all the necessary paperwork required to clear customs and immigration and proceed to Timika.  The customs official was very unfriendly and flatly refused to grant any clearance into the country.  One of the passengers spoke his language and attempted to placate him but he was having none of it.  At this point the flight engineer decided that some sort of graft might be in order and produced a black label Penthouse magazine from his collection and suddenly all clearances and signatures were given along with a very big smile from the official.  We were on our way to Timika.  The take off was uneventful despite the protests of the bitumen filled perforated steel platform and we set course North West. 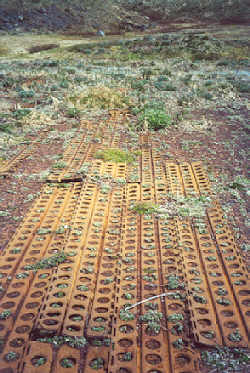 PSP is everywhere in PNG

Some 150 nautical miles from Merauke we were confronted by a very large North-South line of thunderstorms blocking our course.  This appeared to be the front edge of the inter tropical convergence zone which heralds the start of the monsoon season.  These storms are known to penetrate as high as 60,000 feet into the atmosphere and are extremely dangerous for aviators.  Our on board Radar indicated that the line of storms was very wide and there was no safe passage through them.  Heading North over land looked to be completely out of the question so we decided to head South to try to find a way through.  We now were becoming concerned about our fuel having traveled some 60 nautical miles South of our intended track with no clear path through the storm front.  At 100 nautical miles South we found what looked to be a small track through the front between two monster storms.  This was our only chance to get through and so we took it.

Aviators will tell you that even though you pass clear of a large storm you may still encounter heavy rain, hail, icing and lightning.  The path was clear of storms but it was still in heavy cloud.  We picked our way through using our Radar encountering some moderate turbulence rain and icing.  We made it through unscathed but then we had to travel North again 100 nautical miles to search for Timika.  The navigator on board had become ‘rattled’ at the storm penetration experience and was showing signs of stress.  He was responsible for getting us to Timika and it was not going to be easy.  I was worried.  Timika is inland and is situated on a river, the trouble was, which river.  There were a multitude of rivers leading to the coast which was ill defined, as it went from primary jungle to mangroves to sea.  The navigator made a few futile attempts at trying to find the place on his Radar but was having no luck.  This coupled with the responsibility of calculating the minimum fuel required from Timika to track the 100 nautical miles South again to get through the storm front and on to Merauke became too much for him and he quit, yes he gave up, it was all too hard for him and he was too stressed to continue his duties.  He wasn’t the Captain, I was and I was very stressed at this alarming, unforeseen circumstance that had been presented to me.

In any case, now having to just press on as best we could, the rest of us threw the dice selected a river and proceeded inland at low level in murky weather.  Suddenly out of the left side of the cockpit the flight engineer spotted the runway at Timika.  I yanked the aircraft hard left to maintain visual with the field and commenced slowing down to take the undercarriage and flaps as soon as possible.  As we approached the base turn position for the turn back towards the field we went into cloud and lost sight of everything.  I leveled the aircraft hoping to regain sight and fortunately it came back into view, just.  After landing we were warmly greeted by the locals and we hurriedly unloaded the aircraft in order to get on our way quickly.  I did however, take the time to encourage the navigator to ‘get a grip’ and not let the crew down for the return journey…..in no uncertain terms.  He was responsive to my chat and with the pressure of finding Timika now passed he was willing to again become a productive member of our crew.

The return trip was, as expected, filled with trepidation as we once more attempted to penetrate the large line of storms.  Fortunately we only had to travel about 50 nautical miles South before finding a way through this time saving us a lot of fuel, which by this time was getting to be a serious concern.  So with a bit of spare fuel in the tanks and the storm front behind us we were able to relax a bit with only the Merauke runway to worry about.  Merauke required the usual low level high speed pass to alert the well trained livestock to our intentions and they dutifully vacated the runway, albeit only to the extent necessary to allow us to closely pass by them.  A further inspection of the aircraft was required to see what ‘poo’ had been deposited on the wheels and in the wheel wells and we were relieved to find very little splashed deposits.  We would however, be required to inform the Australian border protection people to have them give the final OK.  Our final interaction with the customs official at Merauke was surprisingly convivial and short.  I did see him talking to the flight engineer and I’m not sure if any further encouragement had been exchanged at this meeting, one can only guess I suppose.

We returned to Darwin without any further dramas with our required fuel reserves and a job well done, by most of the crew anyway.  A well earned few beers naturally, a good nights sleep and back to RAAF Base Richmond the next day. The navigator received a less than shining report to the Squadron’s lead navigator and left the Squadron a few months later.

The lesson from all of this as a team leader is, I guess, to expect the unexpected from team members and be prepared to respond to bad situations. It is then that your leadership will be tested and your ability to adjust to the new situation also brought into the spotlight.  Thankfully in any team situation there will always be other members who will respond, take up the slack and extra responsibilities to see the task through to a sound conclusion.  This was so with most of the flight crews of 36 Squadron and I hold dear the experience of working with them during my time there.  Thanks to you all.

The Attempted Space Shot
A Fighter Ace in 45 Seconds