During my early days of flying the Mirage IIIO for the RAAF we focused heavily on conducting intercept missions that were designed to catch high flying bomber aircraft.  These missions were done both day and night.  The Mirage radar was not very good and you would be lucky to detect a bomber at 15 nautical miles.  The aircraft radar had to be continually adjusted and tuned by the pilot during the mission to ensure that the system was operating at peak capability.  The control for the radar was aft of the throttle and it’s operation was not intuitive therefore a lot of practice was required to become skilled in it’s operation.  Additionally the face of the display in front of the pilot contained all the knobs for tuning the radar. Mirage Instrument Panel with Radar at centre above the stick.

On this night mission I was having a lot of trouble with the tuning of my radar and my flying accuracy was suffering as a consequence.  Right from the start of the intercept I was struggling to cope with the workload and what ended up happening was a big lesson in flying high performance fighters.  The GCI was working hard to ensure I completed a successful attack.

When I arrived at the point where I needed to turn into the bomber I delayed slightly putting me, potentially, too far behind to make a successful attack.  At the altitudes I was flying the Mirage needed a bit of afterburner to conduct a level steep turn and since I was aware that I might be caught out too far behind the Canberra I selected full afterburner to make up for my error.

The GCI controller was also giving me confusing information about the position of the Canberra and I was desperately trying to tune my radar and get a contact on it to complete the attack. Based on the GCI’s information I also needed to climb into the Canberra’s altitude block to complete the attack.  I started climbing thinking that I only had a small amount of afterburner selected, all the time furiously trying to get the damn Canberra on my radar.  At this point I should explain that our Mirages were limited to a maximum altitude of 55,000 feet because we did not equip ourselves with the pressure suits that would protect us should the aircraft decompress at heights above 55,000 feet.

Back at the intercept, I looked to the altimeter to determine what radar antenna elevation I needed to get the Canberra contact and was very surprised to see that I was passing through about 52,500 feet and climbing rapidly.  This was initially very confusing as I processed the predicament that I was in.  Instinctively I pushed hard forward on the stick to arrest the climb but because I was also supersonic, this had the affect of lightening the load on the wings reducing the effort required of the engine to propel me even higher.

In my panic I still hadn’t pulled the engine out of full afterburner I just held the stick almost fully forward hoping that the aircraft would eventually descend which it did.  As the aircraft finally started down the hill I finally realised the throttle position and reduced power.  I couldn’t recall what altitude that I had peaked at but it was over 60,000 feet.  Having regained my composure somewhat, I then inquired of the GCI my position relative to the Canberra however, he was also confused as to what was happening.

To my embarassment the Canberra pilot came on the radio and informed myself and the GCI controller that I was approximately five nautical miles in front of him in a gradual descent.  So I had gone from about five miles behind to five miles in front of the target aircraft in a huge leapfrog manoeuvre exceeding the laid down flight limitations of the aircraft. It can easily be seen that this was not a sound tactical manoeuvre either, rolling out in front of your intended victim. Additionally I had gone very supersonic over land North of Sydney which is also forbidden.  All in all an extremely terrible mission on my part but a lot of learning about aviation and situational awareness [or lack thereof] was gained from the experience. 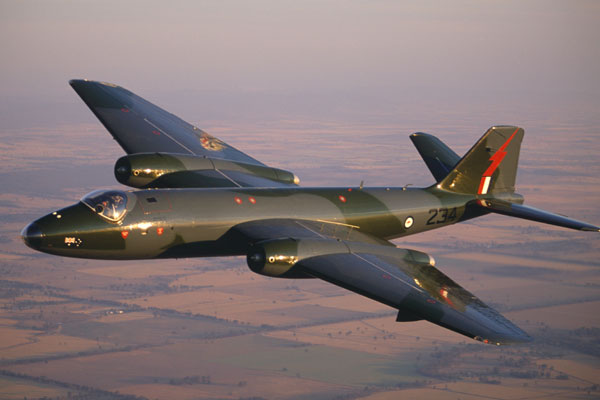