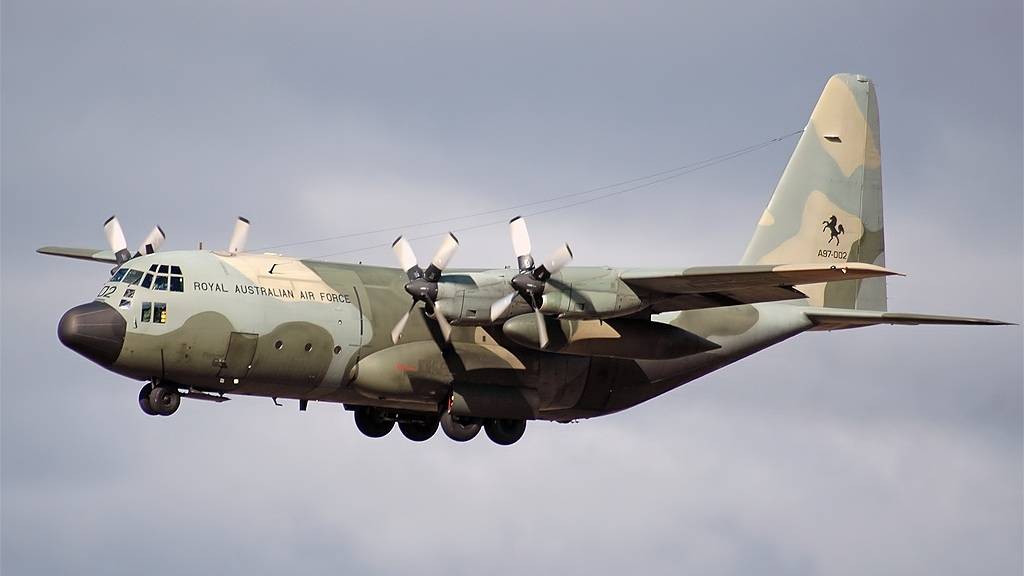 Whenever we were tasked with carrying Army passengers in the Hercules we always looked to carry out some sort of prank to heighten their anxiety when flying with us. This particular prank was instigated by the Loadmaster on my crew for the task of carrying some 80 Army personnel from RAAF Base Richmond to Rockhampton for a major exercise.

To start the prank the Loadmaster and I swapped flying jackets and proceeded to board the already loaded aircraft. On entry we were greeted with a sea of green camouflage suits anxiously waiting for us to get going. Now all of my crew were very experienced and we knew each others tasks very well and we were all of similar age and so we all looked our part. So I was dressed as the Loadmaster and he was dressed as the Aircraft Captain.

I commenced my Loadmaster briefing in the true style of a Loadmaster talking to Army troops. This meant plenty of expletives to drive the messages home. So the briefing went something like,[expletives deleted]”alright I’m your Loadmaster for this trip by now you should be seated with your seatbelt done up tight, if you’re too dumb to get it done up raise your hand….right good, under your seat is a lunchbox with your rations in it, I don’t want to see any of you dropping any sh..t on the floor or you’ll be sweeping the whole aircraft out when we get to Rocky. Once we get airborne if you see the overhead lights turn red and/or you hear an alarm bell ring seat down in the nearest seat and strap in and wait for me to tell you what’s happening and what not to do. If we have a crash landing you will exit via the para doors at the back there or the ramp if I have the time or inclination to open it. Get out in an orderly manner and don’t stomp all over your mates trying to be the first to get out before anyone else. Are there any questions, no good.”.

At this point the real Loadmaster dressed as me comes down from the flight deck and gives the Captains passenger brief in a disturbingly effeminate voice which went “Hi everyone, welcome aboard I’m Phil Frawley your Captain today we will be flying to Rockhampton at 26,000 feet and the weather along the route is fine and the Weather in Rocky is also fine and a lovely 29 degrees. Once we are airborne feel free to ask the Loadmaster for permission to come on up and visit the flight deck. We can only do this two at a time so not everyone will get to get up there I’m sorry, anyway enjoy the flight and I’ll see you when we get to Rocky.”

Now here the Loadmaster [dressed as me] turns to me and asks if everything is set to go down the back here whereupon I start on him with, “of course everything is good down the back, it always is, I don’t know why you even have to ask, I mean you haven’t got a clue about what goes on down here!”. He then turns to me and replies “Nothing down here is too complicated you ought to try and do the things we have to do on the flight deck it’s very hard stuff.”. At this point all the Army passengers believe they are witnessing a crew mutiny and are sitting stiffly at attention, particularly the Commanding Officer, a Lieutenant Colonel, who is by now increasingly, very disturbed at what he is seeing. The argument then proceeds with me exclaiming ” well I’ve seen what you guys do up there and it doesn’t look all that hard to me.”. The real Loadmaster [dressed as me] then says angrily “well if you think it is so easy why don’t you go up there and try to do it then.” I then replied confidently, “alright I bloody well will, I’ll show you!!” We then step past each other giving each other a serious glare and swap positions, with the real Loadmaster aggressively taking a seat and strapping in and yelling out “I don’t reckon he can do it.”, just as the engines on the Hercules are starting.

Apparently there were some 80 ashen faces staring at each other and restlessly fidgeting in their seats waiting for the crash alarm to sound and planning their evacuation strategy. Naturally all went smoothly and we managed to get airborne safely. The Lieutenant Colonel insisted on being the first to get to the flight deck to assess the situation where he suddenly discovered the subterfuge, I had taken off the Loadmaster’s jacket, and he fortunately saw the funny side of the prank. He did however, swear to get even someday whatever it took. Our arrival into Rocky was also smooth and I took my place outside the aircraft as the troops disembarked muttering and swearing under their breath and giving me all sorts of looks which mostly expressed the sentiment “you bastards!”