During my time as a display pilot I met most of the warbird owners in Australia, of these Mr Guido Zuccoli became a good mate. Guido was living in Darwin in June 1990 when 77 Squadron, of which I was the Executive Officer, arrived for an exercise. During my time off I, of course, went to visit Guido and his lovely wife Lynette. Guido asked me if I would like to have an endorsement on his beautiful Fiat G-59 which is basically an Italian version of the P-51 Mustang although not quite as good in performance. It is a beautiful aircraft to fly and I thoroughly enjoyed the experience. When Guido and I got back from the flight he reached into his book case and pulled out a document and gave it to me saying “read this Phillip and come back tomorrow”. It was the flight manual for his Hawker Seafury, I was both stunned and excited to think that Guido would let me fly this magnificent aircraft.

The Hawker Seafury was, at the time of it’s entry into service, the fastest piston powered aircraft in the world. Unbeknownst to me the flight in the Fiat G-59 was a test to see if I was capable of handling the Seafury. I took the manual back to the barracks and studied it until I knew it like the back of my hand. The next day Guido took me out to the aircraft and ran through some of the idiosyncrasies of the aircraft and also checked my knowledge of it’s systems. Having completed the preflight requirements we strapped in, the aircaft had been converted to a two seater so Guido came along for the ride. Once on the runway and being fully aware of the power this aircraft delivered I gingerly advanced the power to ensure I coped with the inevitable nose swing that occurs in a tail dragging aircraft when you raise the tail for take off. At this point Guido slammed the power up to full and before I had a chance to raise the tail the aircraft got airborne in the three point attitude leaving my scrambled brain back on the runway, in other words I was now well behind the aircraft. I quickly regained composure and raised the undercarriage then selected the propeller control to ‘Auto’ and away we went. I should note that in most propeller driven aircraft the propeller control needs to be re-adjusted for varying flight events such as climb, cruise, aerobatics and descent and landing. In the Seafury after take off you merely select ‘Auto’ and you don’t have to touch it again throughout the flight, absolutely marvelous because you virtually have a throttle, just like a jet, and that’s all you have to control. The other feature of the aircraft is that during flight you can select the flaps to “Max Lift’ and they will automatically schedule the flaps to suit the speed of the aircraft. In other aircraft this is also called ‘Combat Flap’ which means that in a fight or doing aerobatics the flaps will move up and down so that you can always turn the aircraft as tight as possible for the flight conditions, wonderful. The flight in this amazing aircraft was fantastic, it was so good to fly. So on the return to Darwin Airport Guido instructed me to do a ‘Beat Up’ as everyone enjoyed seeing the aircraft low and fast, I received a clearance from Air Traffic Control to execute the ‘Beat Up’ and so I set the aircraft up at around 3,000 feet to have some descent potential to get the aircraft up to 400 knots or 740 km/hr. To my surprise I achieved this speed very quickly before I even set up the descent to the runway. Note:- a “Beat UP’ is usually a high speed very low pass along the intended runway prior to landing, a particular favourite practise for combat pilots.

The ‘Beat Up went over very well and I proceeded to complete a number of circuits with touch and go landings/take offs. Guido then told me he was satisfied with my ability to handle the aircraft and instructed me to make a full stop landing. He also impressed on me the need to use a ‘double braking’ technique to slow the aircraft as the brakes were not very good on these aircraft. “Now he tells me!”. I landed the aircraft without difficulty and I was slowing it gradually as instructed when the nose began to oscillate from side to side finally departing the runway in an abrupt left turn (a Ground Loop in aviation terms) and heading for a drainage ditch which, thankfully featured very slightly inclined edges on both sides, it was also empty and the whole surface was quite smooth. We exited the drain and were heading for the F/A-18 Hornet flight lines with all the maintenance troops looking very surprised to see us when I finally managed to bring the aircraft to a stop in a cloud of dust. While this was transpiring Guido was yelling at me to “DOUBLE BRAKE DOUBLE BRAKE!!” and I informed him reasonably forcefully that I was “Double Braking”. Anyhow we came to a halt in a position that allowed us to taxi back to the hangar. 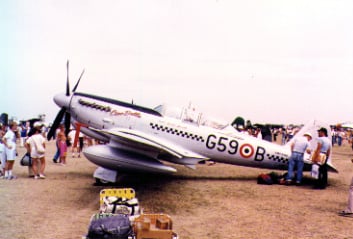 Air Traffic Control asked us if we needed any assistance from the Fire and Rescue Services and I replied that we would only need a laundry truck. I’m sure that they would have been very amused by this remark. I taxiied the aircraft back to the hangar and got out of the aircraft finding that my legs were shaking so much I couldn’t walk so I sat on the wing for a few minutes so I could regain my composure. At this point Guido slapped me on the back and said “Don’t worry Phillip, every 20 or 30 landings I do the same thing”. Oh great Guido thanks for that, cheers. Guido then said “Anyway, no worries we will refuel the aircraft and you can go solo now OK.”. I was amazed that I had ‘Ground Looped’ his aircraft on landing and he was still prepared to let me loose in it. I did not feel confident or composed enough to take the aircraft flying again but I felt kind of compelled to accept Guido’s offer. In any case one of Guido’s maintenance men pointed out that the right main wheel was bent and we shouldn’t fly the aircraft. Phew, saved. It turned out the right main wheel stub axle had been bent and the four bolts holding the undercarriage leg had been stretched slightly and had to be replaced. The tyres had also been shredded and had to be replaced. I had no way of repaying Guido and his main maintenance man, Nobby, for the damage I had caused but I was reassured by Nobby that Guido had done much worse and not to worry about it. The maintenance crew were more than satisfied with the two cartons of VB stubbies that I gave them so all was good.

The cause of a Ground Loop on tail dragging aircraft is usually attributed to the interaction of gyroscopics (the rotating propeller), aerodynamics (the tailplane of the aircraft) and any crosswind present. This usually occurs without warning on landing when all of these forces conspire against the pilot. Tail dragger pilots will tell you there are two types of tail dragger pilots, those that have ground looped and those that have yet to experience one which is inevitable. I attempted to work out what I had done wrong to bring about the Ground Loop but I was at a loss to explain it, as was Guido. When we checked the wind conditions at the time of the incident we discovered that during the time I was doing circuits the wind had changed from a headwind of sorts to a quatering tailwind and that had caught me out because I was concentrating so much on flying the aircraft that I didn’t notice the change in the wind direction. That’s aviation for you.

That is not the end of the story, some months later I was taking part in an airshow at Mangalore in Victoria. All participating aircrew were invited to a function at the nearby Pub as a greet and meet affair. At this stage I was not well known in the warbird community and so I was standing alone in the Pub while a circle of warbird pilots and owners had gathered nearby. I was listening to their conversation when the subject of ground loops came up (They were all tail dragger people) a lady by the name of Judy Pay, a famous warbird owner/pilot, remarked saying “How about that guy who ground looped Guido Zuccoli’s Seafury, what a newbie.” (or words along those lines). At this point someone else chimed in and said “I think it was a a guy named Phil Frawley or something, does anybody know him?”. I then reluctantly raised my hand as they all turned around to face me and I revealed that “that would be me.”. A large outbreak of laughter ensued and I was welcomed into the tail dragger community and became a very well known (kind of famous) member of the warbird fraternity allbeit for all the wrong reasons.