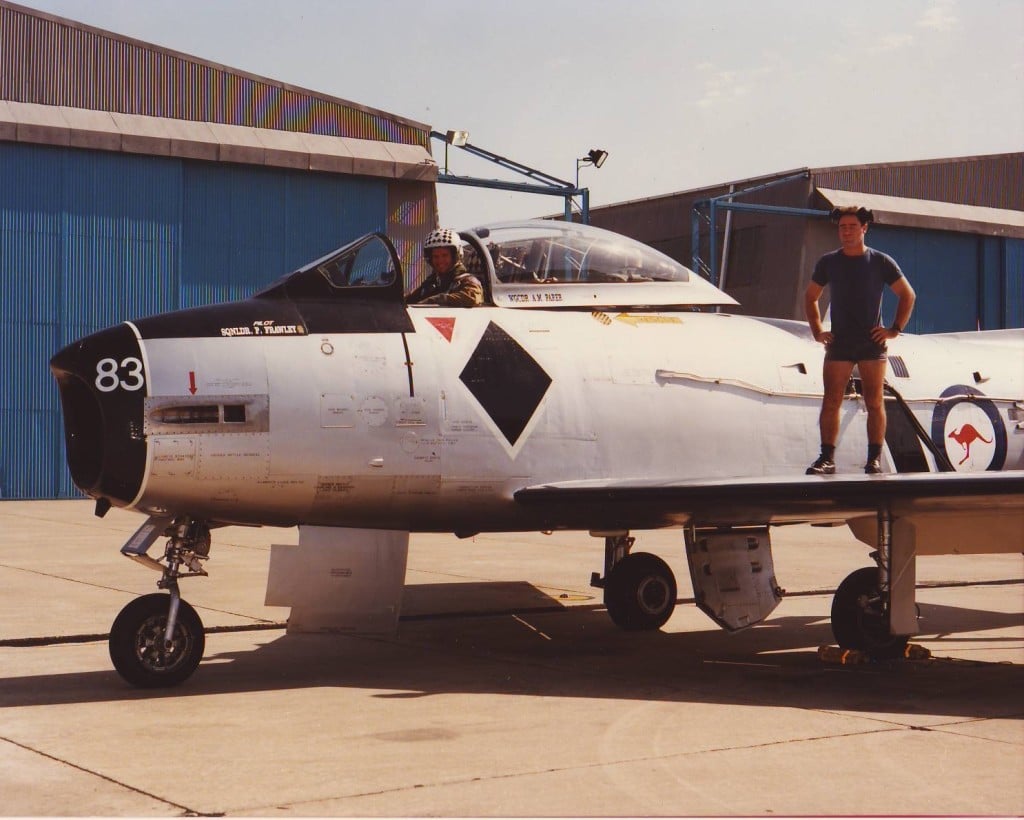 The Australian Sabre was a derivative of the American F-86 that we modified with a bigger engine the Rolls Royce Avon and 30mm canon instead of the six .50inch machine guns. A94-983 was rescued from the Royal Malaysian Air Force after they chose to retire the ones given to them by the Australian Government. The person responsible for the rescue was Wing Commander Mick Parer who was the CO of 75 Squadron in Butterworth Malaysia at the time flying Mirages. Naturally he had at his disposal a number of tradesmen who had worked on Sabres before they transferred to Mirages. I’m not sure how long the restoration process took but it was repainted in 75 Sqn colours and this is the scheme it retains today flying with the Temora Aviation Museum.

Mick Parer sort permission to test fly the aircraft prior to having it sent back to Australia but this was denied. A compromise was reached and a high speed taxi run down the runway was authorised by the Air Commodore in charge of the RAAF Base. Apparently Mick could not help himself and took it airborne completing a circuit and successful landing. Mick was all but court marshaled for his indiscretion. In any case the jet found it’s way back to Australia where it was again subjected to a major servicing before the then Squadron Leader Dave Leach became it’s first display pilot. Following Dave was Wayne Higginbottom, Doug Riding and then myself. Kev Merrigan joined me to share in the busy show schedule followed by Mike Nixon.

So how did I get to fly this wonderful aircraft? Well I just asked, I was posted into 81 Wing headquarters as the Standardisation officer with Group Captain Ray Conroy the OC and one day I walked into his office and asked ‘what was the go with the Sabre’. He immediately rang Doug Riding who answered straight away ‘yeah sure Frawls would be good to go, get him down to East Sale to do the conversion training’. The excitement of being chosen to fly and demonstrate this machine was incalculable.

The Sabre is a single seat jet fighter with no two seat training version available and no simulator to practise on. Basically you study the flight manual, talk to the instructor about it’s handling qualities and then after doing a couple of starts the instructor hops on the wing and stands beside you while you taxi it around. Then first flight is first solo as well, let me tell you that gets the adrenaline pumping. Naturally I had a lot of flying experience in Mirage and Hornet jets at the time so the performance of the Sabre was not a challenge.

The aircraft is a delight to fly and the visibility through the bubble canopy is fantastic. It does have some vices however, at speeds above around 420 knots the pilot and aircraft become two separate entities vying for control. The jet will start to porpoise a little and the cycle is one per second, the reaction of the pilot is roughly the same and so by the time you react to an upward trend by pushing forward a little the jet is already going back down. This can result in an undamped phugoid that will quickly develop into an overstress of the airframe. To stop this from happening you let go of the controls and let the jet steady itself, which is somewhat disconcerting the first time it happens to you.

The next surprise is that if you stall the aircraft with the wheels and flaps down and the aircraft is even very slightly out of balance [slip or skid] it will rapidly enter into a spin. This was the cause of at least one fatal accident. I myself experienced this first hand. I hadn’t flown the jet for some time so I decided to get reacquainted with it by doing the RAAF standard profile with general handling and stalling followed by circuits. Fortunately I was flying at 10,000 feet at the time, I had completed the clean configuration stalling with no problems, as expected. For the approach configuration stall I slowed the aircraft down put the gear and flaps down and just before it stalled I noticed the skidball was slightly out to the right. I introduced the tiniest amount of pressure on the right rudder pedal whereupon the aircraft flicked and entered into a spin. My first priority was to get the gear and flaps up so that they would not be oversped [they have a maximum speed for operation], which I did successfully.

My next thought was that I was about to crash the world’s only flying CAC-27 Avon Sabre and I frantically set about attempting the spin recovery technique which was surprisingly successful fairly quickly. The aircraft recovered from the spin but was now in a spiral dive and accelerating rapidly towards the ground. For preservation reasons A94-983 was limited to 4 ‘G’ although 6 ‘G’ was available in an emergency. Pulling out of the spiral dive I pulled back on the stick and locked the ‘G’ meter on ‘4’ and assessed my dive recovery progress as reasonably good with 6 ‘G’ probably not required. I recovered the aircraft to level flight at 1,500 feet above sea level, where I was, over land, equated to about 1,100 feet. As a lot of pilots often say ‘I learnt about flying from that’. I was also blessed that the sphincter muscle was so tight that the underwear was also saved from any over stress.

About the only other unpleasant aspect of flying the Sabre was flying it with big external [drop] tanks on. The tanks had no baffles in them and were prone to ‘sloshing’ causing the aircraft to rock backwards and forwards and making long transit flights at high level very tiring.

I consider myself to be honoured to have flown A94-983 and join the elite group of men who also had and have the privilege of doing so. It was a wonderful experience doing all the air shows and talking to the aircraft enthusiasts about the Sabre. Lastly I am indebted to the maintenance crew who all became great mates, they looked after me and the Sabre very well, thanks guys good job. 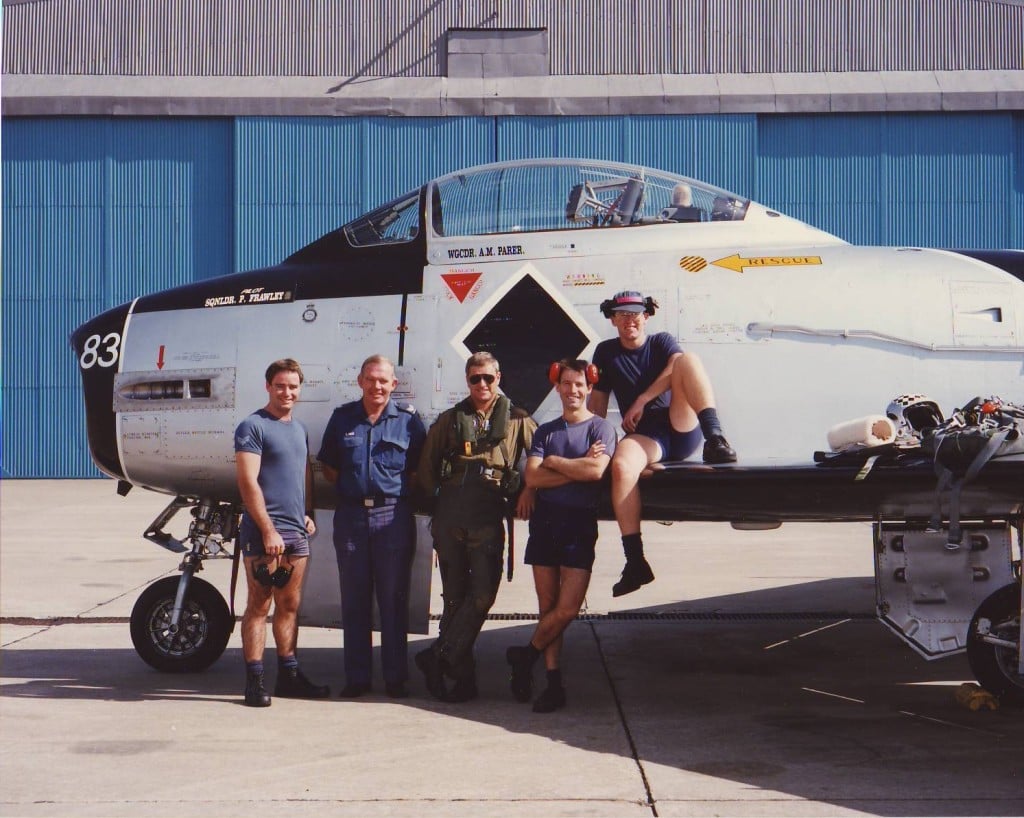