The L-39 Albatros first appears on the scene in the late 1970s manufactured by the Czechoslovakian aircraft company Aero Vodochody. It’s design has all the hallmarks of Russian design bureau techniques. The L-39’s principal purpose is that of a lead in fighter trainer and it was used by many Eastern Bloc Countries. Interestingly the Royal Thailand Air Force operate it as well. Most air forces around the world utilise a lead in fighter to train their pilots in the basics of air combat and weapon delivery techniques and tactics. This is a much cheaper way of doing business and it also highlights any weaker students who in all probability would not cope with training on the front line fighters such as the MiG-29 Fulcrum and the SU-27/37 Flankers.

Thousands of L-39s were built and an upgraded variant the L-129 has also been manufactured. Being of Russian descent the L-39 is a robustly engineered and incredibly reliable aircraft, it has a stated mission safety success rate of 98%. Compare this with Martin Baker ejection seats with a safety rating of 95%.

The Al-25TL engine is reportedly a copy of the Garrett engine used in Lear jets and many other aircraft and it produces about 3,800 lbs of thrust and the aircraft weighs in at around 10,150 lbs. So the thrust to weight ratio is quite small being short of 0.5:1. That means it is not really that fast and cruises at about 250 kts or 402 kph with a maximum of 435 kts or 805 kph although at higher altitudes it can achieve around 900 kph. There are nine L-39s in Australia with (at time of writing) seven in flying condition. Many of them are used for the conduct of adventure flights. 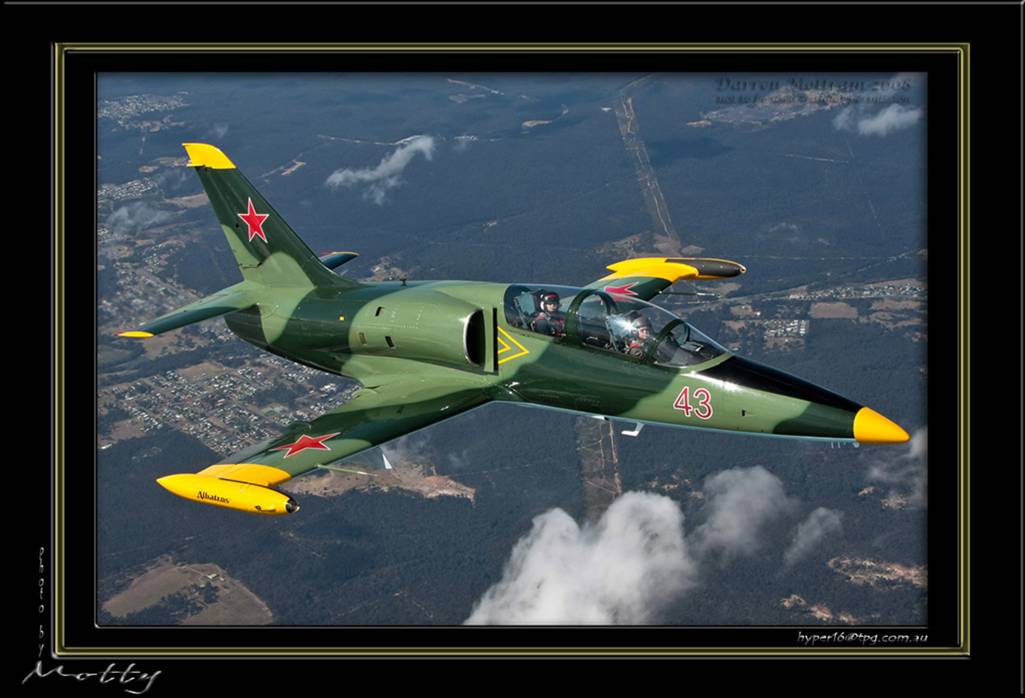 The L-39 Albatros is a very pleasant aircraft to fly with benign handling qualities throughout it’s flight envelope. I have been flying them since 2002 and I have about 530 hours of flight time in it. The overall performance is similar in many ways to the Macchi MB-326 that the RAAF operated for 30 years. Aerobatics are relatively easy with just 4 ‘G’ required to accomplish pretty much all of the manoeuvres that you can do. Because of it’s reliability and ease of operation I have had very few ‘adventures’ flying it. I have had two main hydraulic failures due to maintenance errors and I have burst a few tyres on landing (see The Adventure of Terry Tyreburst blog) also due to an installation error.

I have flown one from New Zealand to Australia which took three days. The owner and I picked up the aircraft from Wanaka on the South Island and after a lot of test flying embarked on this trying trip. We had to fly to Queenstown to have it fully fuelled for the trip North to Norfolk Island via Nelson and an overnight at Kaitaia on the tip of the North island where we were met by the Kaitaia Aero Club. Their hospitality was an outstanding feature of the trip and very much appreciated. A Forced overnight on Norfolk Island came as a result of an electrical fault with the aircraft warning system. After spending the night phoning all over the world to find a fix and armed with tools and helpers we arrived at the aircraft to find that the fault had disappeared. So the next leg of the trip was to Lord Howe Island a distance of 488 nautical miles. The range of the aircraft with it’s external tanks was 590 nautical miles. The maximum allowable head wind for the leg was 20 knots. At top of climb we had a headwind of 19 knots and that certainly makes you review your calculations many times over. We got there with a bit of spare fuel. The runway at Lord Howe is short for the L-39 and so I had to calculate the maximum weight to safely get airborne but still with enough fuel to make Coffs Harbour. Take off required a head wind of at least 7-8 knots plus we had to clear a three metre sand hill just off the end of the runway. To my dismay the wind dropped to nothing just as I released the brakes for take off. I coaxed the aircraft into the air and eye witnesses claimed we missed the sand hill by about a metre although I am sure it was more like two metres. The remainder of the trip to Coffs Harbour and on to Cessnock in the Hunter valley near Newcastle was pleasant and without any anxious moments.

I also flew one from Perth to Port Macquarie with my great mate, Rod Hall, and although it was quite a tedious trip in the end, it was completed without any problems at all.

All in all I have the utmost confidence in this remarkable jet and I thoroughly enjoy taking people for adventure flights in it. If you get the opportunity to go flying in one don’t pass it up, you will love it, as so many have in the years that these aircraft have been used in the adventure flight business.

If you are interested in learning more about this wonderful aircraft, head over to Wikipedia.