In 1977 Ken Warby became the fastest man on water in his home built jet boat Spirit of Australia. 317.16 miles per hour or 510 km per hour, breathtaking! Since then a few have tried to take the title only to wind up dead so Ken still holds the record, an amazing feat. Most people in Australia would not even know about this.

Around ten years ago I was asked to attend a boat show in Newcastle to promote an adventure flight business. The owner of the business was also sponsoring Ken and his new jet boat as well and so we met at the boat show and we have been great mates ever since. Ken lives in Cincinnati these days and so we didn’t see each other for a few years. Incidentally the new boat wasn’t as successful as Ken wanted it to be and so it lives in America these days doing occasional display runs at various regattas

So I was thrilled to hear that he was coming back to Australia to help his son David build Spirit of Australia II in an attempt to break Ken’s record and keep the record in Australia. I wasn’t sure how often we would get together though as I imagined that he would be well occupied with the building of this new boat. Ken then informed me that the project was being undertaken just around the corner from my place in Merewether, Newcastle.

That was four years ago. So through no fault of my own I became very involved in the project. I also befriended Ken’s son Dave and we have also become great mates. It turns out that Dave and I share a very warped sense of humour which drives Ken mad at times. Up until recently my involvement in the project was merely helping lift stuff and handing out tools to Dave or just chatting about the project. I did give a little bit of advice on the boat’s aerodynamics and the jet engine intake design and size but really Ken had that all in his mind anyway. I was totally taken in by the methodology used to build this boat. The design is based on the original Spirit of Australia but slightly bigger all round and with a much larger Rolls Royce Orpheous jet fighter engine that produces 5,000lbs of thrust. In essence it was off to Bunnings to buy the wood the tools and hardware and then start gluing/stapling it all together. As it started to take shape I was astounded at the skills that Ken and Dave possessed, to this day I am truly in awe of the process.

Now this dirty big jet boat needs to be road transportable and as such it would need to have a custom built trailer. So Ken and Dave went ahead and built one from scratch, incredible. At this point my involvement became somewhat more hands on. A lot of time was spent “shooting the breeze” and during these chats I revealed that as an ex-RAAF apprentice I had completed a NASA soldering and wiring course along with an electronics diploma. The next thing I knew I’m lying under this great big behemoth of a trailer doing all the wiring. It took Dave and I quite a few days to complete this and I must confess that, although I stuck to the training that I had received at Wagga, I wasn’t sure that my handy work was going to be all that successful. One of the other team members then brought his car in with the appropriate trailer connector plug to test out all the trailer lights. The first test of the lights vindicated my fears as some of the lights didn’t work. Then someone said that the trailer needed to be connected to the tow bar as well to provide the earth required and guess what they all worked. What a surprise for me and I must admit a feeling of pride and satisfaction at a job that was very well done, even if I do say so myself!

Meanwhile the boat building continued and got to the stage where all the electrics needed to be wired in. My reaction – “What’s everyone looking at me for?”. The call from Dave – “mate can you just connect up the bilge pump and the waste fuel drain pump?”. Then the next thing I am up against is wiring up the whole damn boat. This is the boat that is going to set a new world water speed record and they want a ‘numpty’ to do all the wiring, are these guys kidding? I managed to get all the looms ready to be connected to the instrument panel and one day at lunch with Ken I tried to get him to employ an auto electrician to connect it all up. Ken’s reply was “mate it’s too easy you’ll be right, don’t worry about it”. So I pressed on and completed the job with very little confidence in my ability and the ultimate success of my work. Then the moment of truth was upon me when we bravely decided to “test all the systems” and connect the power to it all. I looked around the shop for a fire extinguisher as I was sure that we would need it. First we tested the warning lights and they worked, then we tested the Exhaust Gas Temperature gauge and it worked, the bilge and waste pumps worked, amazing! Then the call, “excellent let’s test the igniters”. Ignition switch “ON” and a large spark came from the top igniter but not where it was supposed to be sparking, inside the engine. I knew it, I just knew I’d stuff something up! Dave Appleby, another team member, realised that the igniter was not tightened properly into the engine. After tightening the connection it all worked perfectly. Holy crap I had actually wired up potentially the fastest thing on water in the world and everything worked first go. I am very proud of being a part of this project and having Ken and Dave as truly great mates if you want to know more check out their website warbymotorsport.com. I can’t wait for Dave to start testing the boat, and finally breaking the record stay tuned. 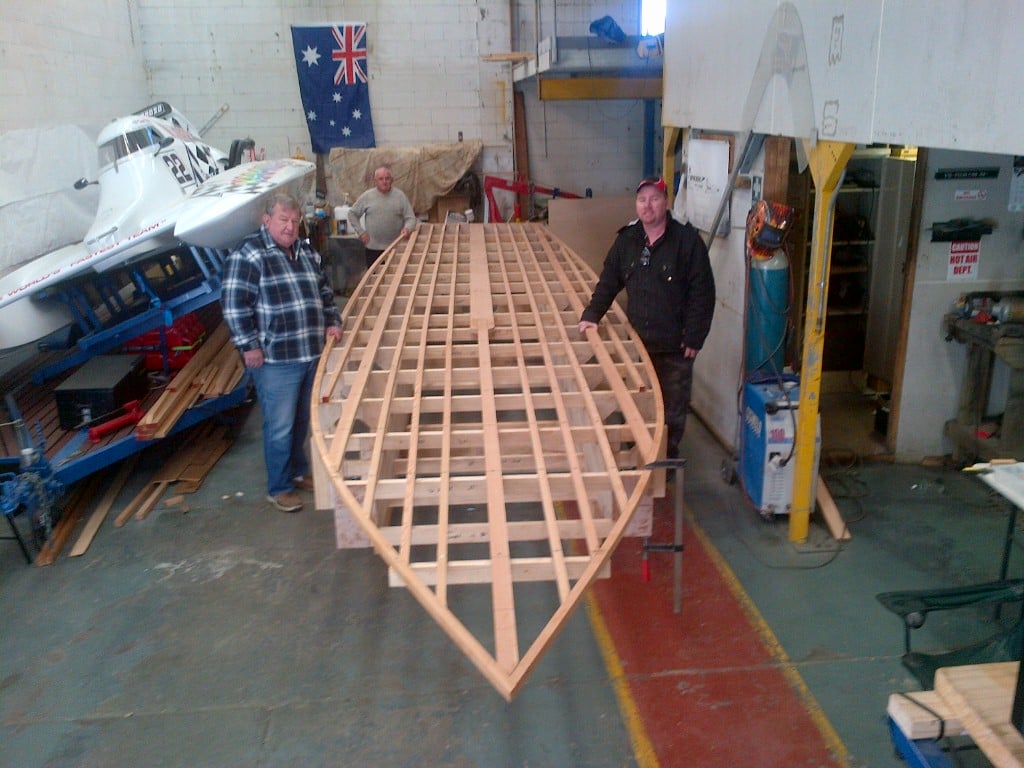 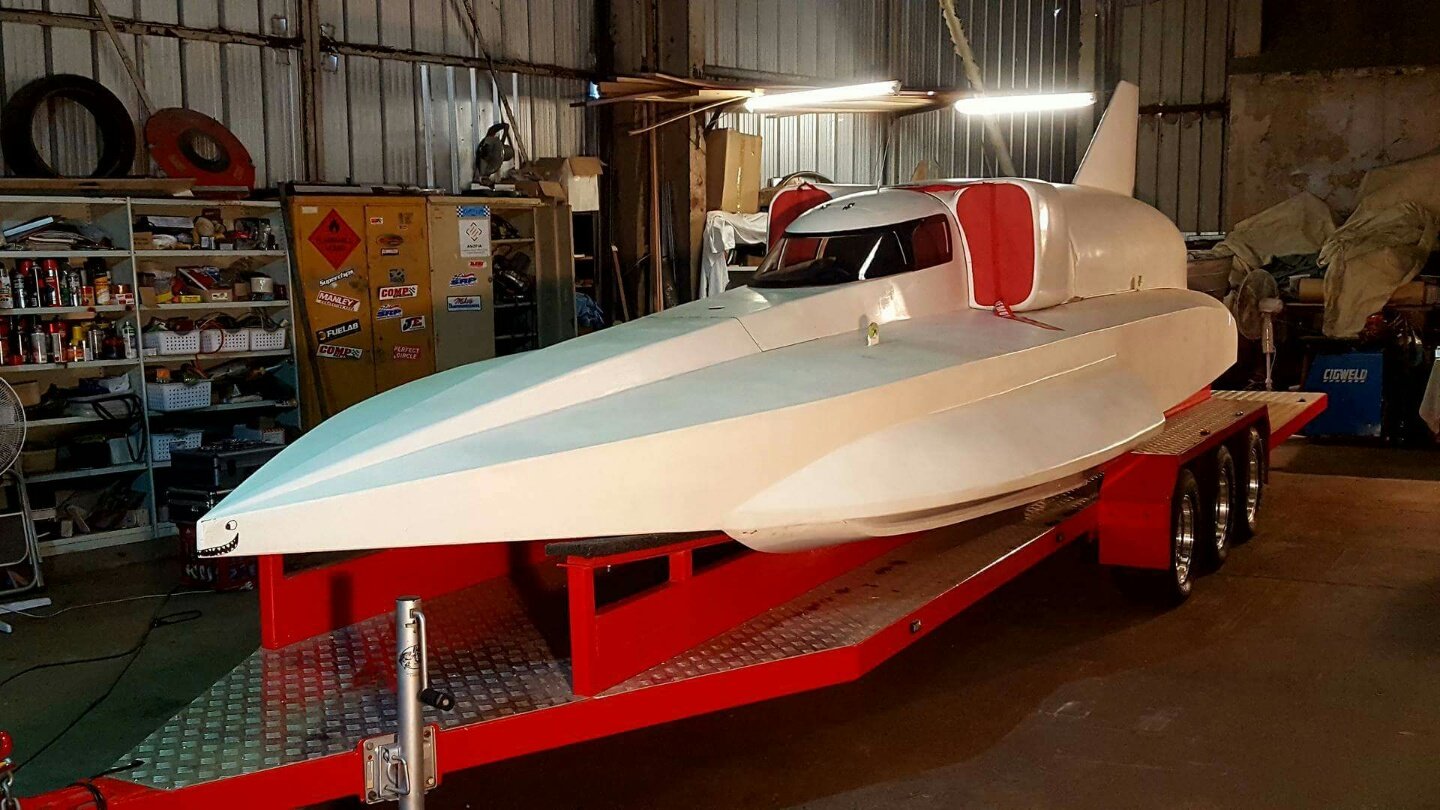 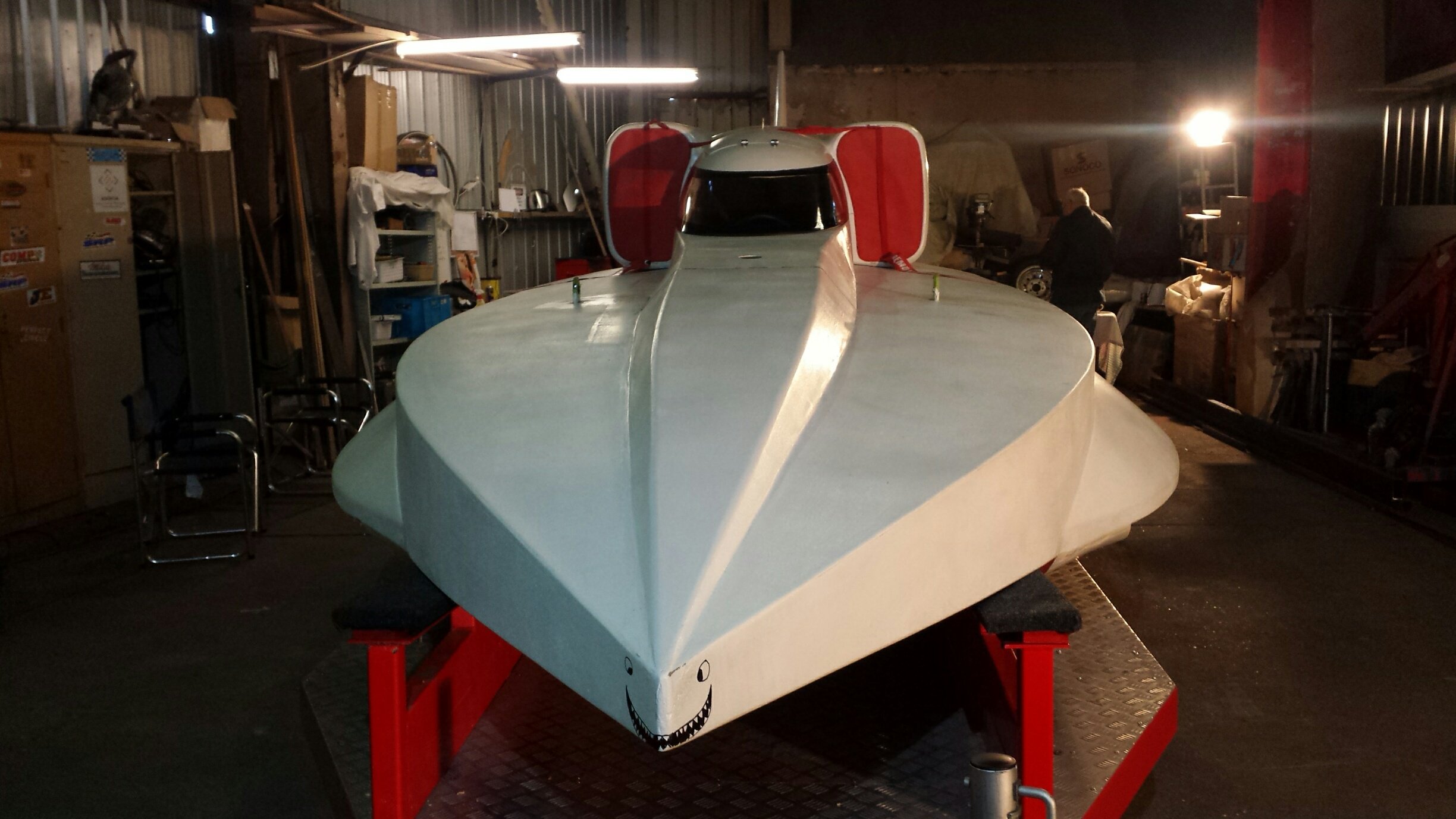 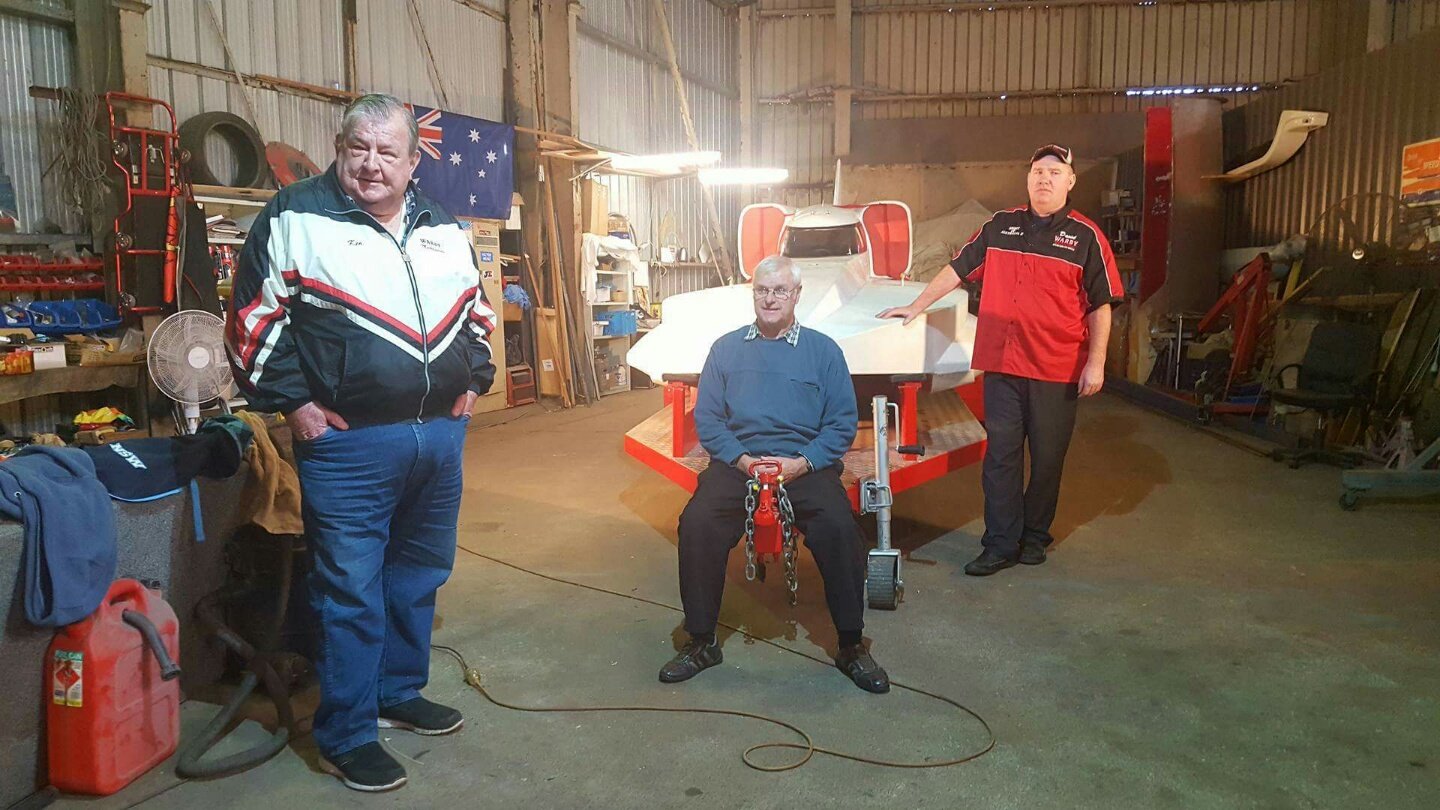 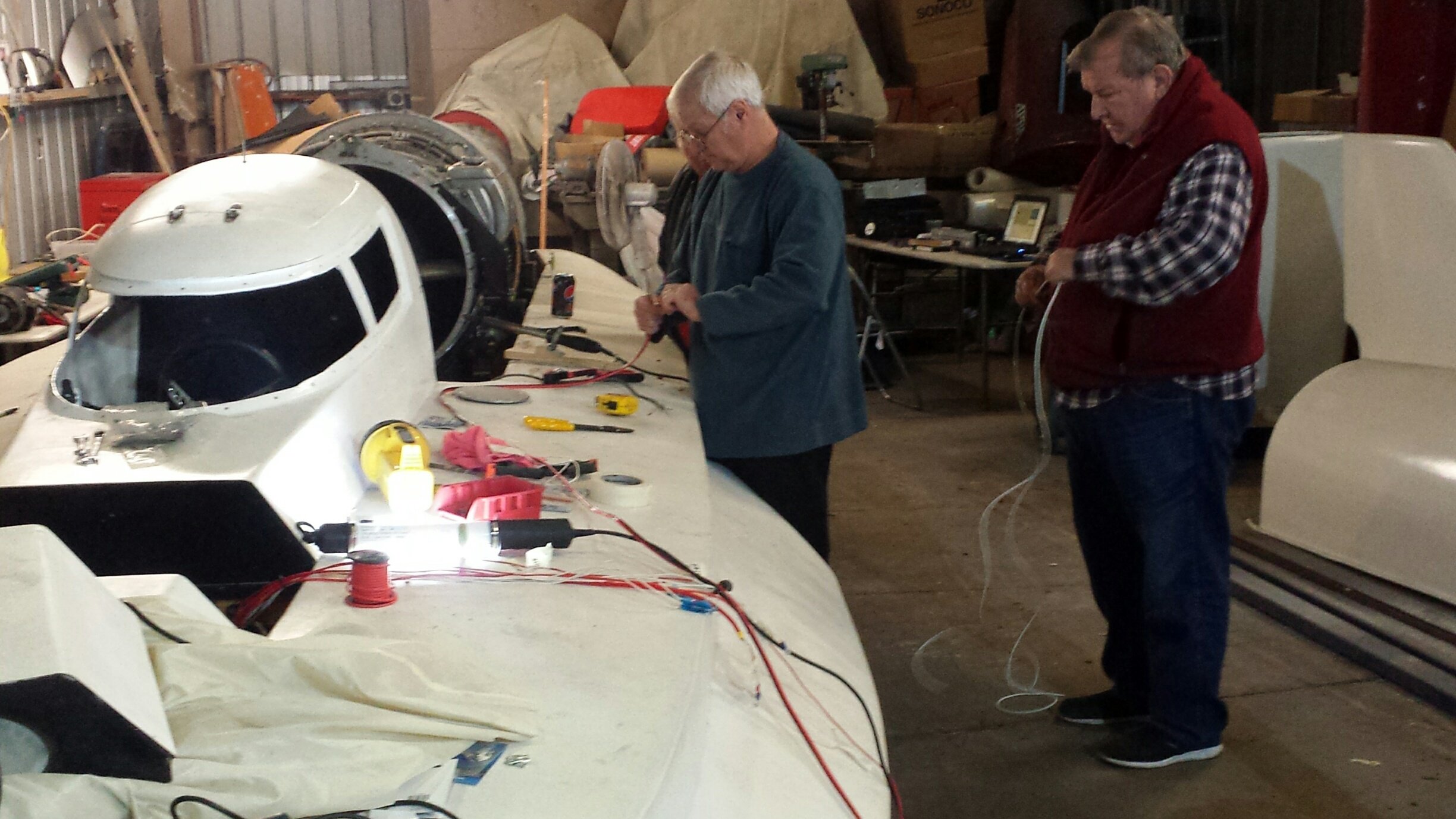 The BAE Systems HAWK 127 Lead In Fighter
The Mirage IIIO