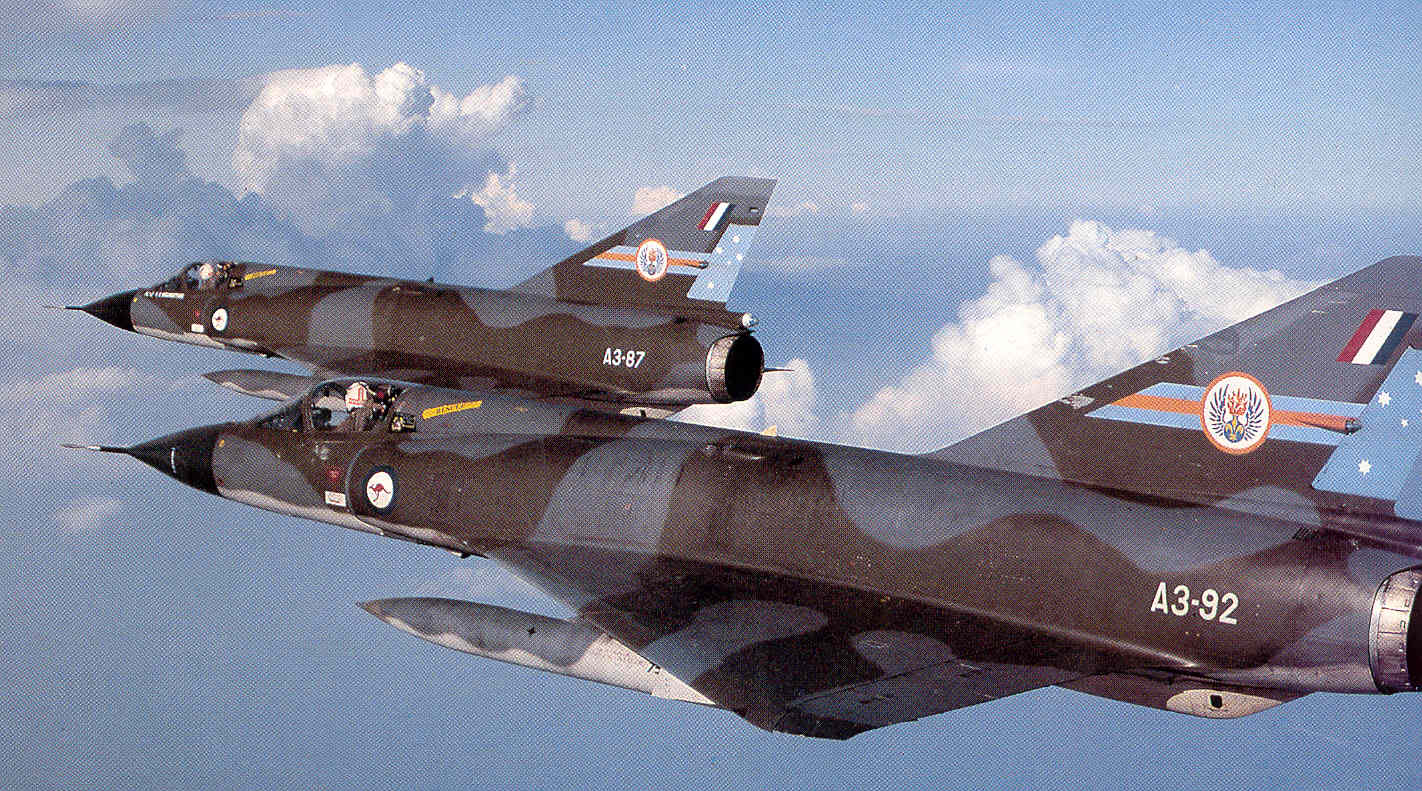 The Marcell Dassault Mirage III was designed as a supersonic interceptor capable of dealing with Soviet bomber aircraft of the day. To that end it was never intended to be an air superiority fighter nor a strike platform. The RAAF however, needed the aircraft to be all of these things and developed it’s roles accordingly. As with all multi-role aircraft it became a “jack of all trades” and a “master of none”. I don’t intend to go into the history of the aircraft, just talk about flying it and the many adventures I had in it.

The Mirage was very high performance, it was capable of getting to Mach 2 and all pilots did this on the conversion course and for most, including myself, that was the last time. It climbed at 400 knots and it’s most efficient cruise speed was Mach 0.9, landing speed was 180 knots necessitating the use of a brake chute on every landing. The wings had no flaps which is why it’s landing speed was so fast. The flight controls were called elevons in that they functioned as both elevator and ailerons. The elevons were split in two and on the inboard of the trailing edge were the pitch dampers. The pitch dampers helped with control of the aircraft by damping out pitch (nose up/down) oscillations. The rudder also had a yaw damper to stabilise longitudinal flight. All of this hardware was controlled by a flight controls computer that relied on an air data computer to determine aircraft altitude, airspeed and outside temperature along with total impact temperature and fed this into the flight control computer. The flight control computer then positioned the flight controls accordingly based on pilot input. The electronics in these computers were analog and valve operated. Delve into google to find out about electronic valves. There was a rudimentary auto pilot that even worked sometimes.

I had many adventures flying the Mirage mostly due to my own screw ups. My first was while in 77 Squadron, I was detailed to help the new Executive Officer of the Squadron, one Mike Tardent, with his refresher training by being the adversary in a 2 versus 1 air combat manoeuvring mission. My jet had a configuration of RPK-10 external tanks, these tanks had mounts for 500lb bombs on them and were much more “draggy” than the normal supersonic tanks. I had never flown with these tanks before. I was briefed by the mission lead, Dave Pietsch, to come to the merge and fight reasonably hard but not too hard. I came to the merge at Mach 1.2 and 32,000 feet, as briefed, with tally on both fighters. At this point I should point out that when the Mirage slowed back from supersonic flight it would ‘tuck’ and increase ‘G’ by about 2 ‘G’ so you had to be careful not to overstress the jet as it did so. Back to the fight, I entered a left turn with about 4 ‘G’ allowing for the ‘tuck’ whereupon I saw the lead of the pair starting to threaten me so I rolled down to meet him and felt the ‘tuck’ (I thought) and having assumed that I was now subsonic, I believed that I had the full 6 ‘G’ available to me. With this in mind I pulled hard into the lead fighter only to have my aircraft pitch and roll violently to the right and after some impressive gyrations proceeded to enter a pitch oscillatory spin. What I thought was the ‘tuck’ was actually the aircraft stalling, it had slowed significantly quicker than I expected due to the ‘draggy’ RPK-10s. The outside observers saw a large flame exit the rear of the aircraft as the engine compressor stalled and were alarmed to see the aircraft gyrate/tumble and enter the spin. Dave recalled thinking “we are going to lose a jet here” and waited for the ejection. Meanwhile the ‘loose nut behind the stick’ was going through some confused thoughts as the aircraft went through it’s pitch oscillations. Basically every rotation the aircraft would stop at the straight and level attitude for a second and then violently flick again into another rotation. The first time it did this I thought the jet had recovered itself only to be disappointed as it entered the next rotation. I finally realised what was happening and went through the spin recovery procedure which was eventually successful. As the aircraft recovered I was quite disorientated and I thought that I was at about 12,000 feet (2000 feet above mandatory ejection for loss of control in a Mirage) however, I was at about 22,000 feet. Had I not recovered I might well have misread the altimeter passing 20,000 feet and ejected. In any case all good except for one important fact, I was still dropping like a brick and upon moving the throttle forward from idle I was rather dismayed to find a lack of commensurate noise increase. The engine had flamed out, so some pretty quick relight actions were needed to restart the engine, this was also successful and I was able to arrest the rate of descent. I was now down to about 14,000 feet. The indignant Dave Pietsch was suitably underwhelmed by my performance and ordered me to “GO HOME”. Incidentally intentional spinning the Mirage was prohibited and no one had spun one with RPK-10s on it, so I had briefly entered the realms of a test pilot.

I had another event with RPK-10s while flying out of RAAF Base Learmonth in north west Western Australia. Again this involved Dave Pietsch who was mission lead for a live bombing exercise to the bombing range south of Learmonth. The aircraft were loaded with 4 500lb Mk-82 bombs mounted on the RPK-10s. Our mission profile was to conduct a 45 degree pop up attack with a subsequent 30 degree dive to release altitude. Dave briefed me to aim for the middle of his impact area with my bombs. I had never dropped bombs from the RPK-10s before but I had no reservations about doing so. All went very well until down the dive when I pressed the bomb release button and was startled to hear a very loud bang from the outside of the jet. I commenced recovery from the dive and then realised the bang was from the release charges in the tanks that were empty and so produced a drum like bang as the bombs departed. I was now in a shallow climb doing about 450 knots with two bombs left on board. My pre-programmed release thumb then went ahead and released the remaining two bombs. With 450 knots release speed and a slight upward trajectory the bombs headed for the coast of Australia impacting just a few meters from the beach near a four wheel drive dirt track. Fortunately the impacts were within the range perimeter and no court of inquiry was required. Had a vehicle been on the track there would have probably been a court marshal. My bombing ability for almost missing Australia with two live bombs was the subject of much Squadron mirth and merriment for weeks to come. Little wonder that poor Dave Pietsch never really had high regard for me as a fighter pilot.

The Mirage was a wonderful aircraft to fly and most pilots loved it. A number of men lost their lives during the time that the RAAF operated the aircraft, Lest We Forget. The jet was very unforgiving for mistakes and the instrument lighting was poor making flying at night very scary. I myself had a very frightening case of disorientation at night while conducting intercepts at night out of Williamtown. There were some senior pilots who flatly refused to fly at night in the aircraft.

On another night I was conducting intercepts against a Canberra bomber to the south east of Williamtown when I explored the outside of the aircraft’s envelope. I was turning around behind the Canberra following the ground intercept controller’s directions. I was at 34,000 feet with the Canberra at 39,000 feet. Turning the aircraft at those altitudes required use of the afterburner which should/could be disengaged on rolling out of the turn. At this point I was having a lot of difficulty getting the Canberra on my radar and I was concentrating hard to make this happen. I had also entered a slight climb. It is worth noting that the maximum height for operating the Mirage was 55,000 feet, this was not an aircraft limit it was a pilot limit because at altitudes above this you needed a pressure suit to protect you. Back to the intercept which was not going well I just could not find the damn Canberra on my radar. Looking in to check my altitude I was surprised to see that I was passing about 57,000 feet, I was supersonic, and climbing, still with afterburner engaged. I bunted the aircraft which merely unloaded the wings reducing drag and aiding the climb. I’m not sure exactly how high I got to but it would have been close to 60,000 feet plus. I managed to get back below 55,000 feet quickly when the ground intercept controller’s calls finally began to register with me. Apparently I had overtaken the Canberra earlier on in the intercept which is why it didn’t appear on my radar and I was now some ten miles in front of him. Not a tactically sound method for prosecuting an airspace intruder really.

I had many other adventures in the Mirage and I will relate them in installments later on. I look back on those days with a great deal of pride and elation at having been privileged to fly “The French Lady”. There is a comprehensive book published on the Mirage by two good mates, Darren Mottram and the late Paul Mason, I strongly endorse the work of these two men so google Mirage IIIO and find out where to get the book it is very well worth it. 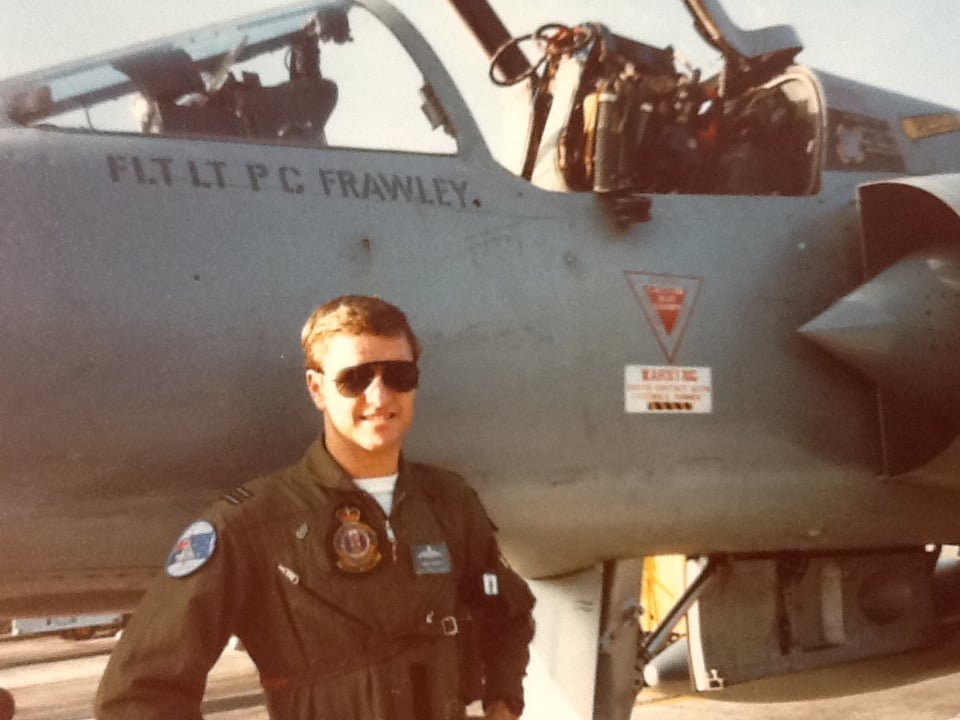