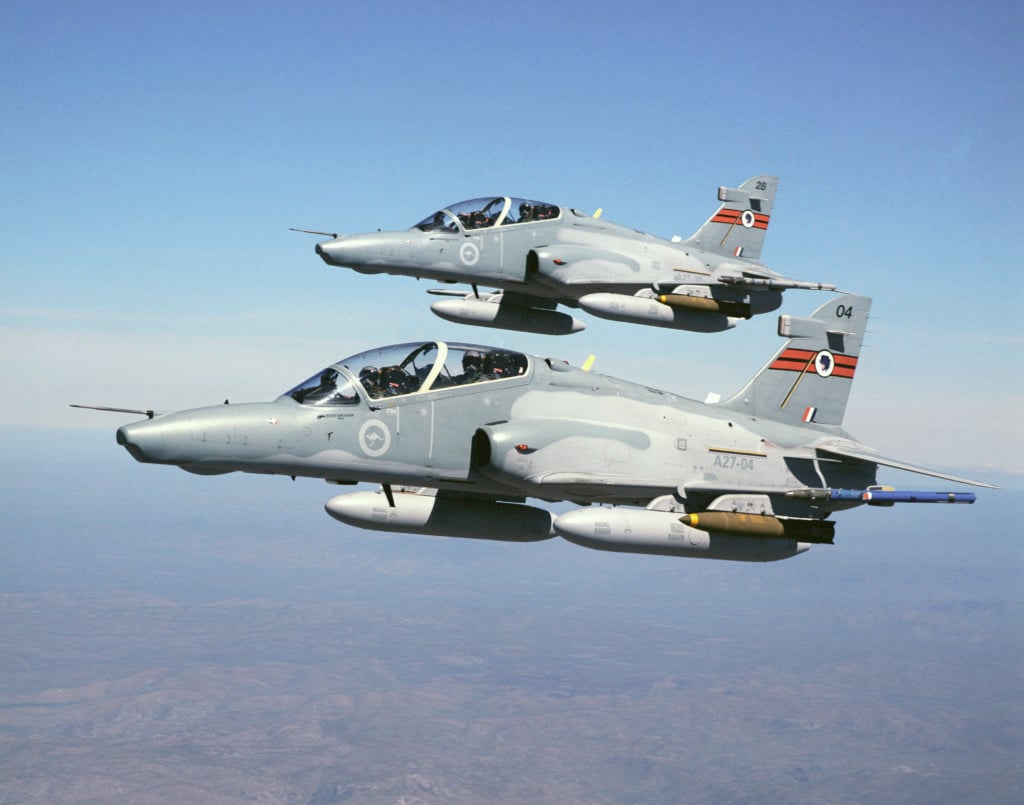 I left the RAAF in 1997 to go to Saudi Arabia, at the time I was the Commanding Officer of 76 Squadron flying the Macchi MB326H. During this appointment I was involved in deliberations about the Macchi replacement. My research indicated to me that the best available lead in fighter trainer in the world at the time was the BAE Hawk. I made my views clear to the Minister for Defence at the time who was visiting the Squadron and he seemed receptive to my reasoning. I made several recommendations as to what would be an ideal fit out and colour scheme for the replacement aircraft and then left it up to the decision makers. There were some opposing views by some senior officers within the fighter force at the time who favoured another Macchi the MB 339. It was in service with the New Zealand Air Force and my contact with the Commanding Officer of the Macchi Squadron indicated that the MB 339 was not a good option as they were having a lot of problems with the aircraft.

A couple of years later, while I was in Saudi, I learned that the RAAF had in fact chosen the Hawk and they had even stipulated that it should have a cockpit configuration approximating that of the F/A-18 Hornet. This proved to be a great step forward in lead in fighter training, as trainees were exposed to a very similar cockpit to the aircraft that they would [hopefully] end up flying. The aircraft was so good that flying training sequences in the F/A-18 syllabus were transferred to the Hawk training syllabus saving a lot of time, effort and missions for No 2 Operational Conversion Unit (2OCU), the unit training pilots on the Hornet.

After arriving back in Australia I applied to become a reserve instructor at my old unit, 76 Squadron. After a period of serving in Air Combat Group headquarters and 78 Wing headquarters, I got the nod to train on the Hawk 127. I already had 800 hours on the Saudi MK-65 Hawk and so I thought the transition would be straight forward, it was not. Although it handled much the same and some of the basic systems were similar the avionics and navigation systems were a challenge to understand. Even though I had F/A-18 time, a long time ago, the logic in the mission computers was quite different. The best part of the avionics is the head up display which is almost identical to the Hornet, that made me very comfortable flying the aircraft even in dodgy weather. The big difference in the appearance of the aircraft is the extended nose section and the chisel nose. The extended nose section houses the mission computers and various other pieces of electrickery. The chisel nose was designed to house a forward looking infrared sensor and a laser spot tracker. These items were not purchased for the RAAF version.

So what is the Hawk 127 like to fly? Quite simply it is an excellent aircraft to fly with pretty impressive performance as well, for a trainer that is. Take off speed is 120 knots rotate and 130 knots lift off. Climb speed is 350 knots with a nose up attitude of around ten degrees, depending on configuration. With external tanks holding 1,000 lbs of fuel each the rotate and lift off speeds increase by 10 knots. Cruise speed is normally around Mach 0.8 although if fuel is not a problem then it will happily get along at Mach 0.85. In essence that is approximately eight to eight and a half miles per minute, a great speed for going anywhere.

I have used a full power cruise from Williamtown to Amberley, a distance of 400 nautical miles and, due to 60 knots of tailwind managed a time of 42 minutes and 25 seconds take off to touchdown. Descent speed is also 350 knots. Maximum Mach number is set at Mach 1.2 at altitude and 575 knots at low level. The only time these speeds are attempted is during post maintenance test flights. The fastest Mach number I have reached during a test flight is Mach 1.01 and 540 knots at low level. The maximum ‘G’ for the aircraft is +8 and -4 ‘G’. Eight ‘G’ is only done on maintenance test flights and believe me it hurts. The maximum ‘G’ normally used is 6 ‘G’ and trainees are limited to this as a training limitation only.

Naturally the aircraft doesn’t turn anywhere near as well as a Hornet but it still provides a challenging performance for trainees new to the world of air combat. The buffet margin is quite narrow. This relates to the amount of rearward stick movement to transition the aircraft from light buffet [maximum lift in a turn] to heavy buffet or ‘G’ stall. This requires trainees to develop a feel for the aircraft, because if you try to fight in heavy buffet or wing ‘G’ stall you will cease to turn and lose every time. Heavy buffet is also bad for the airframe.

The fleet of aircraft is operated by both 79 and 76 Squadrons. 79 Squadron is located in RAAF Base Pearce, Western Australia and 76 Squadron is located at RAAF Base Williamtown. The fleet has just reached a major milestone of 100,000 hours without an aircraft loss, a marvelous testament to the maintenance, aircrew and the safety culture within BAE and the RAAF. 79 Squadron conducts the initial training on the aircraft then trainees transfer to 76 Squadron where they are trained in the basics of air combat and weapons delivery. The aircraft can carry 2 X Aim-9 Sidewinder missiles as well as 2 X Mk-82 500lbs bombs, a gun pack is bolted to the centreline. The trainees, during their course only get to drop practice bombs from a specially designed practice bomb carrier. These practice bombs have a small charge in the core of the weapon that ignites a smoke charge allowing scoring of the impacts at the weapons range. The weapons range is also equipped to score air to surface gunnery. The scoring of the trainee’s weapons impacts makes for spirited competition within the course and provides the instructional staff an indication of the trainee’s technical ability in achieving the correct parameters for weapon release. The techniques are the same as used in the Hornet, albeit with different parameters.

I have been flying the Hawk for near to 19 years now and have more than 2,000 hours on three models of the aircraft, I have 1,600 hours on the Hawk MK-127 itself and I love it. I have never had a major adventure/problem during this time but I have had numerous pleasant experiences doing many operations and training in this great little jet. It gives me enormous pride to see the trainees graduate from their Hornet courses and go on to become highly skilled fighter pilots, joining a very exclusive club. 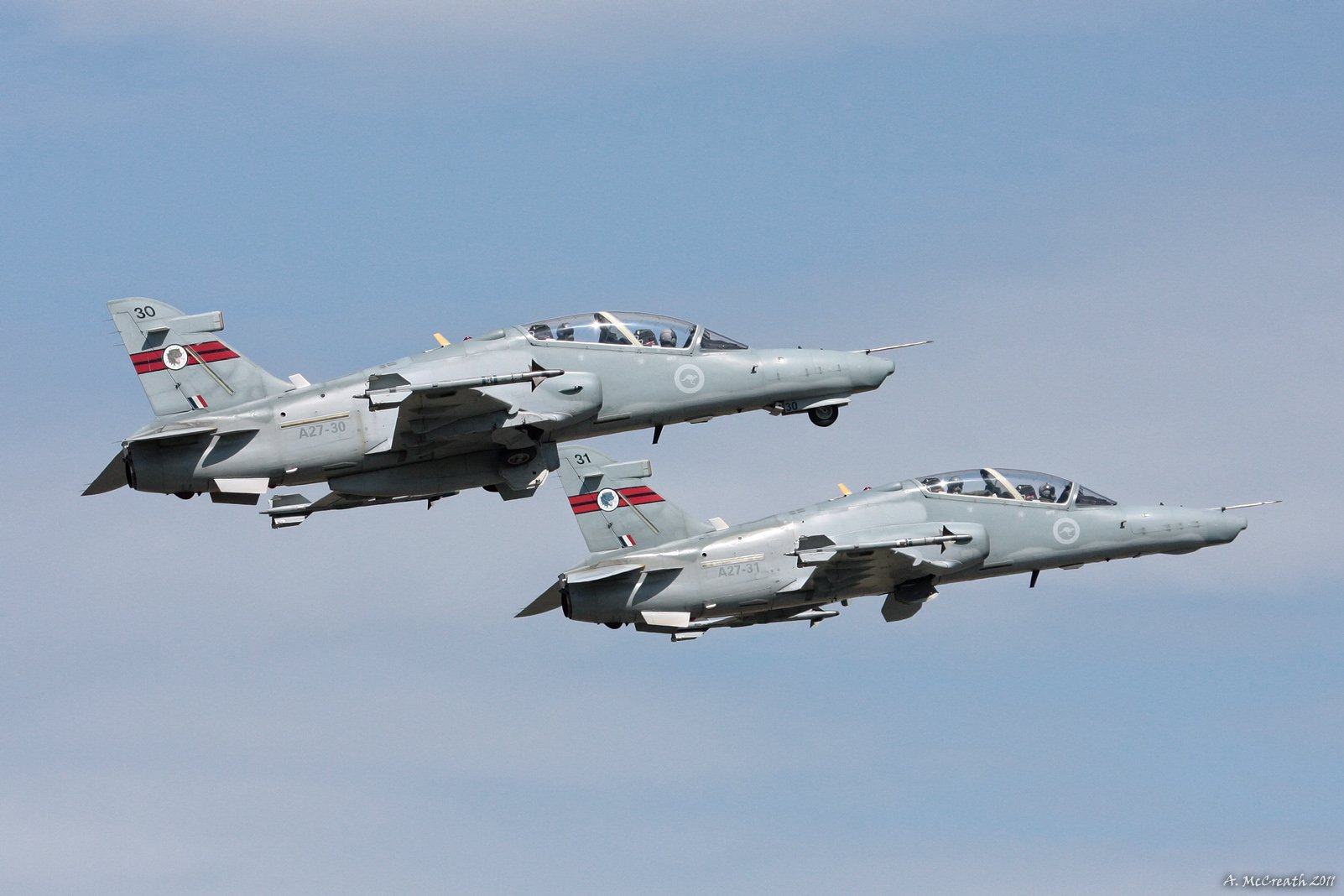 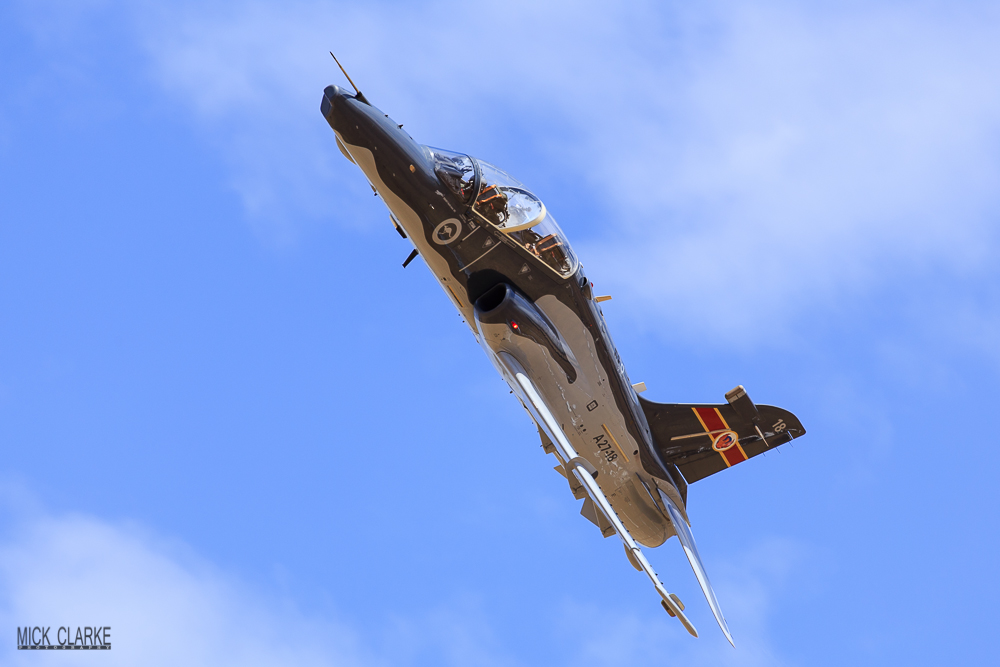