A Close Call in a Hercules 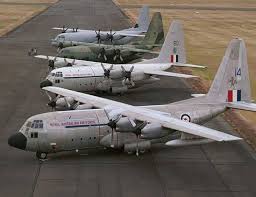 All four models of the Hercules operated by the RAAF. In the foreground is the ‘A’ model followed by the ‘E’, the ‘H’ and the ‘J”. I flew the ‘A’ and the ‘H’ models. Footnote: I was on the last crew to fly the ‘A’ model in the photo.

After about two years flying as a copilot on the venerable C-130 Hercules I was being groomed for captaincy and as such I was doing a lot of flying with the Squadron executives to ensure that I was capable of being a captain.  On this particular mission I was programmed to fly with the Commanding Officer (CO) of the Squadron.  This CO was a particularly hard man who was obsessed with being ahead of schedule at every opportunity and drove his crews harshly to achieve his aims.

The mission itself was a comparatively easy one, known as an East Coast Courier.  The task was simply to fly from RAAF Base Richmond to RAAF Base Amberley (in Qld) and then onto RAAF Base Townsville and return the same way.  At each stopover we would pick up general cargo and passengers as required by the RAAF Air Movements organisation who determined what cargo and passengers needed to be transported to the various bases.

On taxiing in to Amberley the flight engineer asked me for the required fuel load to continue on to Townsville and as I gave him the necessary upload, I was countermanded by the CO who would not let me take on any fuel.  The CO was trying,as usual, to get well ahead of schedule and I perceived that he was testing my ability to fly the aircraft to its maximum economical fuel burn.  The problem was that the weather in Townsville was not very good.  At this time different weather forecasts for airfields were issued for military and civilian aircraft.  Additionally military aircraft had access to a better landing approach guidance capability than was available to civilian airlines.  This was called a Ground Controlled Approach or GCA.

The GCA used specially trained Air Traffic Controllers using a very accurate radar system that could inform you of your exact tracking and glidepath down to 200 feet above the runway.  To that end the military forecast on this day for Townsville did not require military aircraft to carry any holding fuel for the bad weather affecting Townsville but the civilian forecast did.  Holding fuel requirements are detailed in airfield forecasts and may require either 30 or 60 minutes holding fuel to allow for possible weather breaks which would ensure a successful approach and landing.

At Amberley we arrived with enough fuel to continue to Townsville on a fine weather day but not enough for any bad weather eventuality. I was concerned about the civilian forecast and I told the CO that we would be wise to take on more fuel but he refused to allow it.  It is worthwhile explaining that the Squadron had just recently transitioned to a newer model Hercules which was more powerful and as such consumed more fuel and so the corporate knowledge of its performance was not fully understood by the older aircrew in the Squadron who had operated the previous model for many years. Most of the younger aircrew, including myself, were very aware of the implications of how the new aircraft performed due to our extensive training that we had been given.

So it was that we pressed on to Townsville.  As we entered the cruise the navigator received weather updates for Townsville that indicated deteriorating conditions requiring at least 60 minutes holding, but these were the civilian forecasts.  I again expressed my deep concerns to the CO who quizzed me about my options and I said that the flight leg was not long enough to conserve enough fuel to satisfy the Townsville forecast and that we should divert to Rockhampton to take on more fuel.  Again he refused.  It then came to light that because we were a military aircraft and the GCA was available to us we didn’t need to have the extra holding fuel and we were perfectly legal.

I explained that even though that was technically correct the conditions at Townsville were worsening by the minute and we might be caught out with nowhere to go. Now let me explain the GCA at Townsville.  Normally a GCA would pick you up from approach radar directly to around 10 miles but at Townsville the leg to come to this point is about 30 miles extra and a missed approach and follow on approach could be a distance of around 60 miles, a long way.  This is due to the terrain in and around Townsville.

At the descent point for approach to Townsville, about 80 miles out, Air Traffic Control declared that, due to heavy rain and very low cloud, Townsville airfield was closed to all operations.  We had enough fuel for a visual approach and no more.  I don’t know if the sudden gravity of the situation hit the CO but he didn’t show it.  I flew the GCA and I admit I didn’t do a very good job because I was so scared.  When we got to the absolute minimum descent altitude for the approach we could not see a thing.  At this point the CO took control of the aircraft and descended to approximately 100 feet above the ground.  I looked out of the chin window and I could see the houses below us that were very close and I thought that we were actually going to crash.  A moment or two later the flight engineer yelled that he could see the runway off to our right and he guided the CO to  the spot.

The first 1000 feet of the runway was visible and we landed into a wall of water just beyond.  We found it difficult to taxi off the runway with the poor visibility and as we made it onto the taxiway the outboard engine fuel tank empty lights illuminated.  On board the aircraft was some dangerous cargo that had to be offloaded in a special area and so we taxied to that area where the inboard engine tank empty lights illuminated just prior to shutdown.  Following the offload of the dangerous cargo the CO elected to start the aircraft and taxi it to the Air Movements ramp to prepare for the return leg.  The flight engineer attempted to start the auxiliary power unit but there wasn’t enough fuel to even start this unit and the aircraft had to be refueled before it could be moved. The CO did not acknowledge the danger that he had placed his crew and his passengers in and never spoke of it at any time.  I spoke to the crew, away from the CO, and they realised the danger and expressed their concern at what had happened. They also agreed with my assessment of the situation as it unfolded way back at Amberley although they admitted that, at the time, they believed the CO knew more about the information than any of us.

I went on to gain my captaincy in what was then record time for the Squadron, not because of my ability but because many pilots were leaving the RAAF for the airlines.  I wasn’t the only one, my good mate Greg Clynick who joined the Squadron with me also got his at the same time.  I really enjoyed my time flying the Hercules and I look back on it with a lot of pride.